Devin White is one of the many bright points of light in AAASP as the DeKalb County product signed a scholarship to play Adapted Basketball at Texas-Arlington. (Photo by [...]

The DeKalb Silver Streaks are playing in the Junior Varsity State Handball Tournament this weekend in Stockbridge. (Courtesy Photo) The American Association of Adapted Sports Programs (AAAASP) is [...]

Farria Galloway (Stone Mountain HS) was one of the offensive leaders in the DeKalb Silver Streaks 5-3 victory over the Henry Co. Hurricanes last Saturday. The DeKalb Silver [...]

Najee Smothers was the leading scorer for the Silver Streaks in their 8-4 victory over the Muscogee Lions. The DeKalb Silver Streaks upped their 2017 AAASP Handball record [...]

The DeKalb Silver Streaks junior varsity Adapted Sports team opened the 2017 handball season with a pair of victories against the Houston Jr. Sharks. Najee Smothers and Keith Debrosse from [...]

The American Association of Adapted Sports Programs (AAASP) got its beginnings when DeKalb County Schools’ educators put together a volunteer-operated after-school adapted sports program for students with disabilities in 1980.

As the program grew in DeKalb County over the next 10 years the need for a full-time coordinator became apparent. The program modified adult disability sport rules in order to accommodate student athletes while introducing policies to put an emphasis on academic standards. A curriculum was adopted for training and certifying adapted sports coaches. 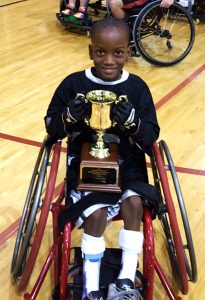 The AAASP was founded as nonprofit 501(c)3 organization with five program sites in Georgia and grew to 11 in 1997 with sports programs including wheelchair basketball, indoor wheelchair soccer and track and field. Beep baseball for sight impaired athletes was added in 2000 and in 2001 the AAASP and the Georgia High School Association formed an alliance that resulted in Georgia’s recognition of AAASP as the official sanctioning and governing body for the state’s interscholastic adapted athletics.

DeKalb entries have won six state championships over the years including four in Wheelchair Basketball and one in Indoor Wheelchair Soccer and Football. State runner-up finishes include two in basketball and four in soccer.