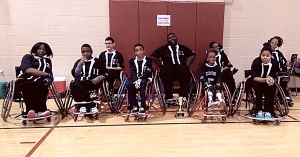 The DeKalb Silver Streaks Junior Varsity Wheelchair Handball team wound up its season as the 2018 Georgia American Association of Adapted Sports Programs (AAASP) state runners-up in a touch 15-10 loss to the Atlanta Wolfpack at Stockbridge recently.

Finished the season at 5-2, the only losses by the Silver Streaks came at the hands of the Wolfpack.

DeKalb finished the regular season with a league best 4-1 record and advance to the finals with a 9-2 win over the Houston Junior Sharks.

The Silver Streaks opened the season with a 5-3, 6-0 sweep of the Houston Junior Sharks and followed with wins of 8-4 and 5-2 over the Henry Hurricanes.