The Towers Lady Titans won three gold medals, three silver medals and one bronze medal on the way to a third place finish at the Class 2A State Track [...]

The Southwest DeKalb Panthers captured the 2022 DCSD Boys' County Track and Field championship. It was the 16th overall for the Panthers. (Photo by Mark Brock) The Southwest [...]

The Chamblee Lady Bulldogs repeated as the DCSD Girls' County Track and Field champions. It is their fourth title overall. (Photo by Mark Brock) Three wins on the [...]

Towers Jamelia Simmons won both the 200 meter and 400 meter dashes at the Class 2A Girls State Track and Field Championships to lead Towers to a third place [...]

Cedar Grove's Oral Ashe contributed to the Saints Region 5-3A totals with his performance in the 400-meter dash. (Photo by Mark Brock) Seven track performers from Cedar Grove [...]

Lakeside, Tucker Combine to Send 22 Athletes to 6A State Sectional

Dunwoody's Janae Profit and Claire Shelton both won a pair of gold medals at the Region 7-7A Track Championships. (Photos by Mark Brock) Ten boys and seven girls [...] 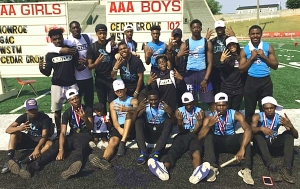 The most successful athletic programs in DeKalb County Schools come from track with the boys’ (48) and girls’ (31) combining for 79 state championships.

The county boasts 575 individual championships, 138 relay titles and 114 multi-title winners between the boys and girls. The amazing numbers all started with W. H. Tanner who won the first title in 1943 as he captured the high jump with a leap of 5 feet-8 inches competing for Chamblee

Druid Hills set the tone for track in DeKalb County Schools by winning the first team title in 1948 on the way to nine titles in a 16-year span, including three in a row twice (1951-53, 1958-60). Southwest DeKalb’s 2007 state title moved the Panthers into a tie atop the state title heap with Druid Hills. Eleven of the 19 current schools have won at least one boys’ state title.

DeKalb currently has a streak of 14 consecutive years (2007-2021) with at least one state track title and a total of 20 (11 girls, 9 boys) in that period. The 2020 championships were cancelled due to the Covid Pandemic,

The county only brought home four titles in the 1960s, but a Lakeside win in 1970 started a run of eight titles during the decade. Six more titles came during the 1980s, including two by Columbia.

Southwest DeKalb became the dominant track school in the 1990s winning six of their titles during the decade, including a three-peat from 1995 to 1997. The Panthers lead the county with 10 total titles after winning a second consecutive title in 2016. Tucker added two more in the ’90s and Stephenson grabbed one.

Cedar Grove got into the state championship game by winning its first title in 2015 and stringing together three titles with wins in 2016 and 2017. The Saints became just the fifth boys’ program to have won 3 state titles and joined Druid Hills and Southwest DeKalb as the only programs to win 3 consecutive championships.

The 2004 Redan Raider track team added the 57th state track championship for DeKalb County Schools by winning the Class AAAAA state title and made it 58 with a repeat title in 2005.

The boys produced 71 multi-gold medal winners over the years, including Avondale’s Danny Buggs (1969-71) and Gordon’s James Flack (1983-85) with six each. Lakeside’s Joe Thorne (2000-02) won five titles in the distance events. There are 14 other DeKalb County Schools athletes with at least four individual gold medals.

The girls’ track programs have won 31 state titles since the first state trophy in 1976 by Avondale as they close in on the boys’ record of 48.

Southwest DeKalb rose to the top of heap in DeKalb County Schools with five state titles since 1984. The Lady Panthers scored a three-peat at the state level from 2007 to 2009 in Class AAAA and reached the top of the girls’ list with the 2011 AAAA state title to add to that 1984 victory.

Avondale was the early leader for girls’ track in the county winning the first title in 1976 and adding a back-to-back title run in 1980-81 to become the first team to win three titles.

Stephenson won the school’s first ever state championship in any sport in 1997, followed it up in 1998 (along with the boys’ title) and then again in a sweep of the girls’ and boys’ titles in 2002.

Tucker got this decade off to a good start by winning the 2010 class AAAA followed by Southwest DeKalb and Martin Luther King Jr. in 2011. It was Martin Luther King’s first ever state title in any sport. Redan then took its second state title with the 2012 Class AAAA victory over defending champion Southwest DeKalb. Dunwoody (second title) and Cedar Grove (third title) won titles in 2013 and a 2014 title by Miller Grove (the first girls’ title for the school) gives DeKalb at least one state title in the past 8 seasons.

Incomplete records on individual gold medals only go back to 1975 with DeKalb athletes garnering 312, including 255 individual (track 196, field 59) and 57 relay gold medals.

Since the 1983 meet, the girls have put together 55 multi-gold winners. Chamblee’s Emily Reese moved to the top of the DeKalb list by winning her seventh and eighth gold medals in 2008 (3200- and 1600-meter runs), the fourth consecutive year she doubled up on gold medals.

2022 (All Schedules Subject to Change. Please Check with Team/School to Confirm)