Southwest DeKalb's Xzaviah Traylor (with ball) examines the defense as Miller Grove's Javon Terrell comes out to cover during the Panthers 49-35 win over the Wolverines. (Photo by Mark [...]

Druid Hills guard AJ Etienne (2) looks for a pass following a steal on the defensive end of the court. Towers' Brandon Underwood (2) was chasing Etienne and came [...]

Druid Hills' Karon Strickland (1, shown here in action from earlier in the season) had 16 points as one of four Red Devils in double figures in a 72-44 [...]

Southwest DeKalb senior Alex Jackson drives inside the three-point line during second half action in a 59-32 loss to Forest Park on Friday night in the Class 5A Sweet [...]

Columbia's Mekhi Turner (35) gets the ball up court against Banks County during the Eagles Class 2A state playoff 71-40 win over the Leopards. (Photo by Mark Brock) [...]

Southwest DeKalb freshman Camille Files (left, shown here against St. Pius) made a big pass to Aalon Turner for the go-ahead basket in the Panthers 39-35 Region 5-5A championship [...]

Tucker's Raylan Barrion sails to the basket for two of his 16 points in the Tigers 51-45 win over the No. 2 ranked Westlake Lions. (Photo by Mark Brock) [...]

Columbia Sweeps Lovett Teams to Advance to 6-2A Championship Games

Columbia's Nia Anderson (2) pulls down a rebound against Lovett's Allie Steel during Columbia's Region 6-2A semifinal win at KIPP. (Photo by Mark Brock) It was a Columbia [...]

Redan becomes fifth DeKalb basketball team to qualify for a state tournament berth. The Redan Raiders moved into the Region 5-3A Boys’ Tournament semifinals with a 58-45 win [...]

Four DeKalb teams have qualified for their respective state basketball tournaments. Thirty-three more play this week for their opportunity to go to state. The GHSA Basketball State Tournaments [...]

Southwest DeKalb's Brooklyn Scrubb (20) dribbles inside of St. Pius' Annabelle Sheridan (32) during second half action of the Lady Panther's Region 5-5A 48-41 loss on Friday night. (Photo [...]

DeKalb Teams Begin Region Tournament Play in 7A and 6A 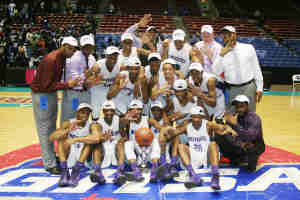 The Miller Grove Wolverines are setting the bar high for DeKalb County basketball teams which have a combined 45 state titles (boys and girls) after winning a DeKalb County record seventh state title with a 50-48 victory over previously undefeated Allatoona to finish the 2016 season.

The Wolverines own a record sixth consecutive state titles (2009-2014) with the sixth coming in a blow out 70-43 win over No. 5 ranked Warner Robins in the 2014 Class AAAAA state championship game.

Druid Hills and Dunwoody held claim to the top spot with three state titles apiece following the 2009 season before Columbia claimed its third title in six seasons in 2010.

Clarkston made it two titles by taking the 1964 crown to go with the 1940 championship season. 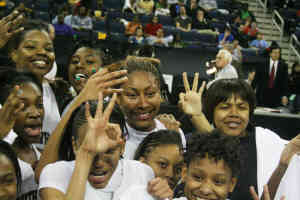 The Southwest DeKalb Lady Panthers sit atop the state championship heap for DeKalb County Schools girls’ after claiming three consecutive class AAAA state titles from 2008 to 2010, its fourth in 2013 (AAAAA) and fifth in 2016.

Stone Mountain ruled on the girls’ side with two state titles (1966, 1997) until Stephenson won the class AAAAA title in 2008 to go with its 2004 championship. Stephenson then joined Southwest DeKalb and Columbia with three state titles as the Lady Jaguars defeated Mays for the 2015 Class 5A championship.

Druid Hills won the first girls’ championship in 1960 and Sequoyah won in 1971.