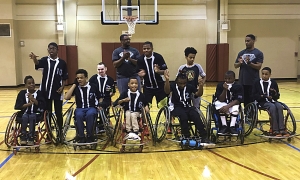 The Silver Streaks entered the championship Saturday at 4-2 and exited at 6-2 followed consecutive wins over the Muscogee Lions (20-6) and Houston Jr. Sharks (24-12) while allowing just 18 points combined on the way to the title.

Houston was 5-1 overall entering the championship and drew a bye as the first place team during the regular season while the Silver Streaks had to face Muscogee in the semifinals.

DeKalb had lost twice to Houston during the regular season by scores of 29-19 and 30-20 before picking up a hard fought 28-26 win later in the year.

The Silver Streaks 20-6 win over the Lions propelled them into the championship game against the rested Sharks.

White put up seven second quarter points to go with two by Najee Smothers (Laurel Ridge Elem) as DeKalb started to pull away from the Sharks. Three more by White in the third quarter and two more by Smothers had the Silver Streaks sitting at halftime with 20 points.

Smothers would score two points in the fourth quarter and two more in the fifth as the Silver Streaks held off Houston for the state championship trophy. 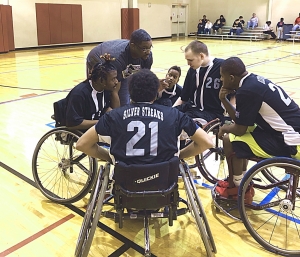 Strategy talk during a timeout against the Houston Jr. Sharks.

White finished with 12 points in the game to go with 8 by Smothers and 4 by DeBroose. The Silver Streaks had given up 29, 30 and 26 points during the regular season against the Sharks, but great defense aided by the play of Jamell Boston (Cedar Grove Elem.), Robert Edwards (Bethune Middle), David Roberson (Southwest DeKalb), Justice Smith (Druid Hills Middle) and Gary Whyte (Cedar Grove High) held the Sharks well below the 28.3 points per game they averaged against DeKalb.

The title is the fourth junior varsity title for DeKalb including two by the DeKalb Eagles in 2006 and 2009 and the Silver Streaks’ first in 2015. It is also the 316th state title for DeKalb Athletics.

DeKalb easily defeated the Muscogee Lions for the fourth time this season 20-6 in the semifinals to advance to the championship round.

The DeKalb Silver Streaks are coached by brothers Delton and Everette Schoates.