Chamblee's Naa Adua Annan goes for a kill in first round play of the state volleyball playoffs. Annan had a solid final match in Chamblee's Sweet 16 loss to [...]

Dunwoody Sweeps Rockdale County out of the Class 6A State Playoffs

Dunwoody's Hayley Brown comes up with a big dig during her team's 3-0 Class 6A state playoff first round win over Rockdale County. (Photo by Mark Brock) The [...]

Southwest DeKalb built momentum throughout the season and came out the Area 6-4A runner-up to earn a home playoff match against Lovett on Wednesday at 5:30 pm. (Courtesy Photo) [...]

Lakeside's Lily Kate Kenyon (17) goes for a kill against Tucker in volleyball action at Clarkston on Thursday night. (Photo by Mark Brock) A clean sweep of Clarkston [...]

Stephenson Opens Volleyball Season with Sweep of McNair and Towers

Stephenson's Addison Holloway winds up for a big serve against McNair. (Photo by Mark Brock) The Stephenson Lady Jaguars got their 2022 high school volleyball season off to [...]

Spikefest gets volleyball season off to a big start in DeKalb County this coming Saturday with two pools of play at both Chamblee and Redan High. The eighth [...]

Lakeside's Anna Withee (left) and Chamblee's Sarah Duong (right) had good seasons come to an end as Lakeside (6A) and Chamblee (5A) fell in the Sweet 16. (Photos by [...]

Lakeside's Givlia Maccarrone (middle) receives a serve as teammates Julia Chilton (12) and Anna Withee (15) ready for a play in Lakeside's 3-1 win over Glynn Academy in the [...]

Chamblee Advances to Class 5A Volleyball Sweet 16 Round

Chamblee's Anna Birukuva (left) hits a shot back over Calhoun blockers at the net during the Bulldogs 3-0 win in the first round of the Class 5A volleyball state [...]

Pool winners of the 7th Annual DCSD Spikefest Volleyball Tournament were (clockwise from top left) Dunwoody, Chamblee, McNair and Redan. The McNair Lady Mustangs broke through for a [...]

The 2019 Columbia Lady Eagles (top) and Chamblee (bottom) took home bracket titles in the 2019 DCSD Spikefest. Chamblee and Miller Grove are set to host the 2021 [...]

Lakeside Volleyball Falls to Richmond Hill in Class 6A Sweet 16

Lakeside advances to Sweet 16 of Class 6A state playoffs with 3-0 win over Valdosta. (Photo by Lester Wright) The Lakeside Lady Vikings were the only survivor of [...]

Dunwoody's Morgan Speice (3) and teammate Mary kate Kotzin work together at the net. The pair and their Dunwoody teammates are playing in the Class 6A Sweet 16 on [...] 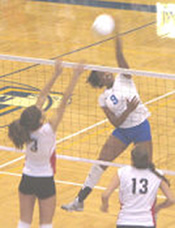 Chamblee’s Nikki Hawkins (9) was the 2005 Gatorade Volleyball Player of the Year.

DeKalb County Schools returned to the volleyball court in the fall of 2000 after two decades of not participating. The schools had fielded both boys’ and girls’ team from the late 1960s until the sport was dropped following the 1980 season.

The Georgia High School Association (GHSA) sanctioned the state tournament in 1993, but it would not be until that 2000 season before DeKalb County would begin fielding girls’ volleyball teams once again.

Improvement in the play of the DeKalb County Schools is starting to show with 9 teams finishing with winning records in 2004 following 8 teams in both 2002 and 2003.

DeKalb began to make some noise in the state tournament beginning with Chamblee’s run to the Class AAAA state semifinals in 2005. Brook Kline’s Lady Bulldogs set the county record for wins with a 56-8 record that season behind the play of 2005 Gatorade Volleyball Player of the Year Nikki Hawkins before falling to three-time defending state champion Woodward Academy.

The 2012 and 2013 seasons would bring two more Final Four appearances to DeKalb County. Lakeside reached the Class AAAAA semis in 2012 behind the direction of Angela Thompson to become the first team since Chamblee to reach the Final Four. Lakeside fell to eventual state champ Whitewater in the semifinals as the only non-Area 4-AAAAA team left in the state tournament. The Lady Vikings finished 29-7 on the season as area champions and were one of five DeKalb teams to earn playoff berths. 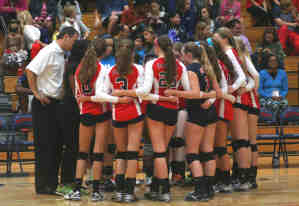 Dunwoody gave the county its first back-to-back Final Four appearances since returning to action in 2000. The Lady Wildcats, under the direction of Coach Doug Friedlander and assistant coach Nikki Hawkins (Chamblee’s 2005 Player of the Year), finished the regular season 22-23.

The post season got off to a roaring start with the Lady Wildcats bringing home the area championship during a seven match win streak to reach the Class AAAAA Final Four in 2013. Dunwoody fell to eventual state runner-up Sequoyah in the semifinals to finish 29-24 on the season.

The Lady Wildcats would extend their Final Four streak to three consecutive seasons advancing to the 2014 and 2015 Class 5A Final Fours falling in close semifinal matches both years.

2022 (All Schedules Subject to Change)