The Lakeside Vikings finished third in the Class 6A Boys State Swimming and Diving Championships. A pair of Top 5 finishes came home to DeKalb County as both [...]

The Chamblee Lady Bulldogs picked up their fifth Top 5 finish at the Swimming and Diving State Championships. It was their sixth consecutive Top 10 finish at state. [...]

Chamblee's Jade Foelske was named the Class 4A/5A Girls' Swimmer of the Year by the GHSSCA this spring. the senior is a six-time individual state champion and a six-time [...]

Lakeside's Kamal Muhammad collected a silver and a bronze at the Class 7A State Swim Meet to help lead Lakeside to a third place finish. Solid performances by [...]

The Chamblee Bulldogs won the program's fourth consecutive DCSD Swim and Dive Championship in 2016. DeKalb County swim teams come together for the 47th year to decide the [...] 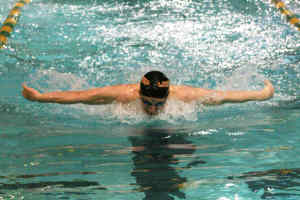 Lakeside’s Jack Lane won four individual state titles and went on to be a four-time All-American at Stanford University.

The beginning of the boys’ swimming excellence got its start in 1954 when Druid Hills’ Bobby McDonough won two of his five individual titles in the 100 freestyle and 150 individual medley. McDonough’s teammate, Buck Hiles, won the first of his two Fancy Diving state titles the same year.

Druid Hills also captured the first relay gold medal in 1955 in the 200 freestyle relay. Avondale’s Lee Bradford stands alone atop the individual state gold podium with seven he won from 1964 through 1967.

DeKalb had a run of 16 years from 1975 to 1990 with at least one individual gold medal coming home to the county.

The last gold medals were provided by four-time state champion Jack Lane of Lakeside with his wins in the 200 freestyle and 100 butterfly in 2011. Lane also doubled on the two events in 2009, but missed out on the opportunity to win the events three consecutive years due to illness before the 2010 state championships.

Avondale has 14 individual state titles with half of them coming from the great run by Bradford from 1964-1967. Lakeside is in third with 12 with eight coming from two swimmers. Lakeside’s Chip Newman (1969-71) preceded Lane (2008-11), a four-time All-American at Stanford, in joining the group of six with four individual gold medals.

The first of the four team state titles, all won by Dunwoody, came in 1976 as the Bonnie Jachthuber led Wildcats began a three-year reign as state champions. The 1976 title gave the school a sweep of the state titles. The 1976 sweep marked the first time a public school boys’ team won the state swimming title and the first time a public school swept the swim titles. Dunwoody added its fourth state title in the 1984 season, also under the guidance of Jachthuber.

The former Peachtree High School was a runner-up to Dunwoody in 1976 and 1977.

Druid Hills owns the firsts in both the girls’ and boys’ swimming as Sandy Weller won the 200 freestyle gold medal in 1954, the same year two boys’ swimmers from Druid Hills won gold medals.

The final multiple gold medal winner was Lakeside’s Katie Suhr, who went on to perform at Virginia Tech, as she won the 200 individual medley and 100 backstroke in 2006 to go with a gold 2005 in the 100 freestyle to become a three-time state champion.

Suhr and Renee Loisel (1970-72) both have three of Lakeside’s 21 individual state gold medals while six other Lady Vikings possess two apiece. Leslie Browdy (1983-86) has five gold medals to lead the way for Dunwoody’s total of 14 while Ginden and Emery combined for all 14 of Peachtree’s individual state titles with seven each.

Briarcliff’s girls brought home the first team title in 1962, the first of three for the school including 1964 and 1968 all under the direction of Frank Hixon.

Dunwoody’s Natanya Harper broke a 12 drought in the state championships for DeKalb County.

Peachtree won two girls’ state titles in 1979 to 1980 under the direction of Coach Tom Davis and led by the duo of Emery and Ginden.

Chamblee joined the state championship crew with the 2019 Class 4A-5A state title to give DeKalb its first team state champoinship since 1987.