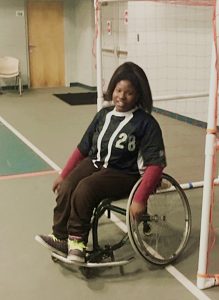 Farria Galloway (Stone Mountain HS) was one of the offensive leaders in the DeKalb Silver Streaks 5-3 victory over the Henry Co. Hurricanes last Saturday.

The DeKalb Silver Streaks picked up their fourth win against no losses with a 5-3 road victory over the Henry County Hurricanes last Saturday in junior varsity handball action.

The Silver Streaks sit atop the junior varsity standings with their 4-0 record on the season.

DeKalb goes on the road to face the Atlanta Wolfpack (1-2) at Sylvan Middle School on Saturday at 4:00 pm. Atlanta defeated Henry Co. 1-4 two weeks ago.