The Chamblee Lady Bulldogs finished as the Class 5A state runners-up in a hard fought loss to Northview. (Photo by Mark Brock) The Northview Titans knocked off the [...]

The Chamblee Lady Bulldogs celebrate their Class 5A State Playoffs semifinal victory over Coffee. They play Northview in the state championship on Saturday, May 14. A 3-0 victory [...]

Lady Bulldogs Knock Off Midtown 4-1 to Reach 5A Semifinals

Dunwoody's Mei Stafford (left) and Ginny Duffy (right) discuss strategy during their 6-0, 6-0 win at No. 1 doubles against Camden County's Ryleigh Blount and Hannah Coffman. (Photo by [...]

Win at No. 3 Singles Sends Vikings into Class 6A State Playoffs Elite 8

Lakeside's Andy Moehlich (top) won the clinching match at No. 3 singles to send the Vikings into the Class 7A Elite 8 of the state playoffs. Teammate Jay Jani [...]

Dunwoody Lady Wildcats Knock Off Cherokee to Reach 7A Sweet 16

Chamblee Bulldogs Win Spot in the Class 5A Tennis Sweet 16

Chamblee's Bryce Starks (top) and Rudy Bhukhanwala (bottom) were in singles action against Calhoun in the Bulldogs' 4-0 first round playoff victory. (Photos by Mark Brock) A 4-0 [...]

Wildcats Go 4-1 VS. Woodstock to Advance to 7A Boys Sweet 16

Dunwoody's Ayden Mamaghani contributed to the Wildcat's 4-1 first round tennis state playoff win with a 6-1, 6-2 victory at No. 3 singles on Tuesday at Dunwoody. (Photo by [...]

Lakeside's Nora Grady and Luca Borisov won singles matches to help the Lakeside teams to first round Class 6A playoff wins on Tuesday. (Photos by Mark Brock) The [...]

Chamblee's Andrew Pietkiewicz leads the Bulldogs into the Class 5A state playoffs this week as one of 15 teams to earn berths. (Photo by Mark Brock) Three of [...]

Lakeside No. 1 boys' singles Julian Santucci (top photo) was on his way to a win when match was stopped. Lakeside girls' No. 1 singles Johanna Goebel (bottom photo) [...]

The GHSA State Tennis Playoffs continue on Tuesday with three DeKalb teams hitting the court for a chance to reach state semifinals. The three-time defending Class 5A girls’ state champions [...]

Chamblee Sweeps Cartersville Out of the Class 5A State Playoffs

Dunwoody's Sophia Chiverton rallied from a set down to win her No. 1 singles match against Denmark's Masha Karch to propel her team into the Class 7A Sweet 16 [...]

Lakeside followed two years later with the 1980 state title and quickly snatched the 1981 and 1982 championships as DeKalb County Schools started its powerful run in the 1980s. The Vikings streak was just part of 15 state titles won in boys tennis action in the decade of the 1980s.

Chamblee provided DeKalb with its 17th boys’ state tennis title with a Class 5A win in 2019. 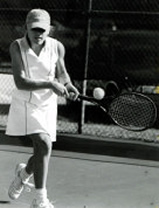 Dunwoody heads up the girls state title winners with a pair of state championships to its credit.

Dunwoody opened the first girls sanctioned state championships in 1980 with a victory. The Lady Wildcats repeated in 1981 and were joined by Druid Hills in the winners circle.

Chamblee became just the fourth team to win a state title and ended a 33-year drought for the DeKalb girls’ with the 2017 Class 5A championship. It was the Lady Bulldogs, who finished 25-0, first state title and DeKalb’s fifth overall.

The Lady Bulldogs repeated for a back-to-back run with their 2018 state title to tie Dunwoody with 2 state titles and with the back-to-back titles. Chamblee finished 22 in 2018 to extend its consecutive match win streak to 47 over the two seasons.

The 2019 Chamblee team completed a three-peat with a 23-1 record and a second consecutive state title win over Kell to become the first DeKalb girls’ team to win three state titles. 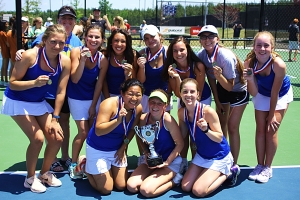 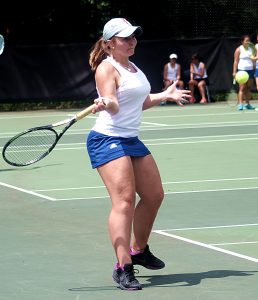 2022 (All Schedules Are Subject to Change. Please Check with Team/School to Confirm)