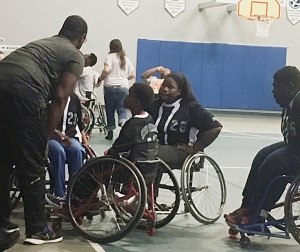 The DeKalb Silver Streaks gather around for a timeout in JV basketball action.

The DeKalb Silver Streaks take a 5-1 record into the American Association of Adapted Sports Programs (AAASP) state championship game on Saturday at Hull Middle School in Duluth with tipoff set for 2:00 pm

Semifinal action and a berth in the finals against DeKalb involves the Henry Hurricanes (5-1) and Houston Jr. Sharks (2-4) earlier in the day.

DeKalb opened the season with a 28-20 loss to the Hurricanes, but bounced back to down Henry 21-20 in the second game of the doubleheader.

The Silver Streaks added four more wins on the season with a 22-4 win over the Houston Jr. Sharks and a doubleheader sweep of the Muscogee Lions 14-4 and 16-0 to go with a forfeit win over Houston.