Clarkston sophomore Abenezer Woellore came in 8th overall in the Class 4A State Cross Country Championships. (Photo by Mark Brock) The Clarkston Angoras returned to the podium with [...]

Clarkston's Abenezer Woellore pulled away on the final lap of the first varsity cross country race at Druid Hills Middle School on Tuesday to finish first and lead the [...]

Some of the action at Tuesday's meet. (Photos by Mark Brock) Yordanos Ephram clocked the second fastest time of the season in DeKalb County cross country meets this [...]

Druid Hills Sage Walker led from start to finish in setting the best time of the season in DeKalb at the third DCSD meet of the season. Walker ran [...]

Lakeside claimed the Region 4-6A girls' cross country title as part of 9 DCSD teams to qualify for the state meet on Nov. 6-7. (Photo by Mark Brock) [...] 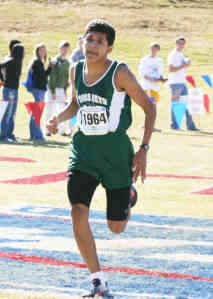 DeKalb County Schools has made its mark on the cross country scene since the 1950s when state competition began with the boys. Since that time the county has brought home 20 state titles in boys and 5 in the girls’ competition.

The first team state title came in 1957 as the Druid Hills boys won the first of two consecutive titles (1957, 1958). Lakeside and the now defunct Gordon High lead the county with five state titles apiece. Lakeside won five titles in a seven-year span from 1969 to 1975, the only non-title years coming in 1971 and 1974.

Clarkston (2014) broke a 28 year drought since the last boys’ state title in 1986 by Chamblee and repeated the feat in 2015 and 2016 to win back-to-back-to-back state titles in the county for the first time since the five year run of Gordon. The 2016 title made Clarkston the third DCSD boys’ team to win three state titles.

Chamblee’s Emily Reese completed her career in 2007 as a four-time state champion.

Peachtree High, no longer in existence, won the first girls team state title in 1979 and was followed by Chamblee in 1981 and Gordon in 1982 (giving Gordon a sweep of the two titles in 1982).

Lakeside also leads the county in top ten finishes on the girls’ side with a county high of 21 out of the 68 within the county. Druid Hills has ten top ten team finishes and Chamblee with its one state title has nine, along with Dunwoody.

The girls’ first individual state title came in the inaugural season of the state competition in 1975 when Lakeside’s Kristi Hanna won the AAA title. Chamblee’s Emily Reese is the most notable girls’ champion with four state titles to her credit including the 2004 and 2005 Class AAAA titles and the 2006 and 2007 Class AAA titles.

Meghan Wetterhall of Lakeside was the last girl to claim a state title with her 2008 Class AAAA crown until Cameron claimed the Class AAAAA state championship in 2012.