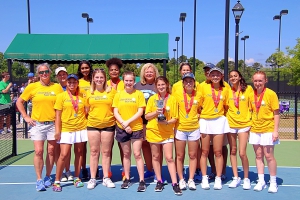 The Chamblee Lady Bulldogs finished as the Class 5A state runners-up in a hard fought loss to Northview. (Photo by Mark Brock)

The Northview Titans knocked off the Chamblee Lady Bulldogs 3-0 in a two-plus hour Class 5A Girls’ State Tennis Championship match at the Rome Tennis Center at Berry College last Saturday (May 14).

Both teams had a battle on their hands as the match stretched to almost 2 ½ hours. Northview notched the first point of the match with a 2-0 win at No. 1 singles by Victoria Guagnelli against Chamblee sophomore Isabelle Coursey who came close to forcing a third set.

Chamblee senior Allison Lvovich and Northview’s Elizabeth Ziabtchenko played some long rallies throughout their two-set match before the Northview player came away with a win to put Northview up 2-0 and one point away from the state title.

The final three matches all went into third sets as the two teams trade sets. 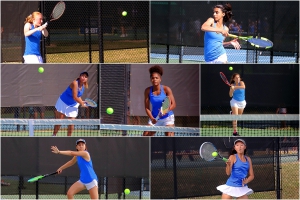 Members of the Chamblee Lady Bulldogs tennis team that competed in the Class 5A State finals include (top row, l-r) No. 1 doubles Grace Seel and Ananya Jatar; (middle row) No. 2 doubles Genesis Pickens and Kennedy Talbert and No. 2 singles Allison Lvovich; and (bottom row, l-r) No. 1 singles Isabelle Coursey and No. 3 singles Sophia Cheng. (Photos by Mark Brock)

Chamblee’s Sophia Cheng won her opening set at No. 3 singles 6-4 over Northview’s Hasini Bollampalli before dropping the second set as the pair would go into a third set. The pair were tied in the third set as the match ended.

The No. 2 doubles match also went into a third set as Chamblee’s Kennedy Tolbert and Genesis Pickens battled back from a 6-4 loss in the opening set to split with Northview’s Jayne Sicbold and Sruthi Yerragunthia with a 7-5 win in the second. The duo broke the Northview twosome to tie the second set at 5-5 after being down match point several times. The service break led to Chamblee’s 7-5 victory to extend the match.

Northview would clinch the match at No. 1 doubles in another three-set marathon as Poorvi Iyer and Swathi Muruganandan won the first set 6-1.

Chamblee’s doubles team of Ananya Jatar and Grace Seel rebounded to extend the match with a 6-4 win in the second set after falling behind 3-4 in the set.

Iyer and Muruganandan won two straight games to end the match with a 6-4 win and give Northview the state title.

Chamblee finished the season 17-7-1 with their state runner-up finish.