DeKalb Competing in the 2022 GHSA State Swimming and Diving Championships 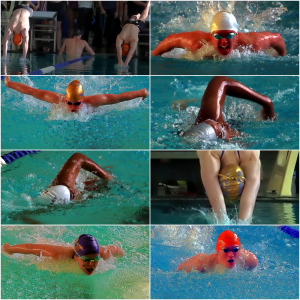 DeKalb swimmers competing in the GHSA State Swimming and Diving Championships this weekend at Georgia Tech.

Eighty-three DeKalb swimmers and divers qualified for the 2022 GHSA State Swimming and Diving Championships being held at the Georgia Tech Aquatic Center this weekend.

Chamblee has the largest contingent competing with 35 swimmers (19 boys/16 girls) going for a spot in the state finals on Saturday during preliminaries today.

The contingent is led by two-time state champion Kyla Maloney (100 backstroke) on the girls’ side along with the 200 medley relay team that has won three consecutive state titles with various team members. Senior Thomas Rice and sophomore Jack McLellan lead a boys contingent looking for its first state gold medal in three years.

Druid Hills’ Anna Verlander qualified in a pair of events for the Red Devils in the 1A-5A competition. Verlander is competing in the 100 freestyle and 100 backstroke.

Martin Luther King Jr. qualified both its 200 medley relay and 200 freestyle relay as well as Trevonte Johnson in the 50 freestyle.

Lakeside is competing in the Class 6A-7A meet bringing in a contingent of 24 (10 boys/14 girls) to swim for a berth in the state finals. The Vikings are led by Craig Steinhauer, a four-time county champion, after winning the 50 freestyle and 100 butterfly at the 2022 County Championships. The Lady Vikings are led by Sophia Hook who won both the 50 freestyle and the 100 freestyle at the County Championships.

Dunwoody has 14 competitors (7 boys/7 girls) hitting the pool at Georgia Tech as they look to seal a state finals entry during preliminaries today. Ryan Altera and Luke Amerson lead the Wildcats into the state meet after both having won two gold medals at the County Championships.

Tucker qualified a team in the girls’ 400 freestyle relay to round out the state qualifiers.