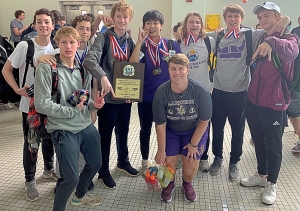 The Chamblee girls’ and Lakeside boys’ repeated as the DeKalb County School District’s Swimming/Diving champions on Saturday at the Chamblee High School Natatorium.

Lakeside scored 271 points to win its 21st title in the 50th year of the event by rolling past Dunwoody 180, Decatur 164 and Chamblee 160 and nine other teams for its second consecutive boys’ title.

The Vikings got the swimming events off to a quick start winning the first three events including the meet opening 200 medley relay with a time of 1:42.44. It was the second consecutive gold in the event for the Vikings.

Lakeside’s Matthew Karpen was up next and swam to the gold in a time of 1:47.50 in the 200 freestyle. Karpen would also pick up a silver medal in the 100 butterfly.

Zachary Zhao brought home his fourth gold medal over the past four years winning both the 500 freestyle (4:49.58) for the third consecutive year and capturing the 100 breaststroke (1:00.47).

Jack Hobbs picked up a gold in the 100 freestyle (51.13) and a silver in the 50 freestyle (21.94) to add to the Lakeside haul including eight gold medals, six silver and one bronze on the day. 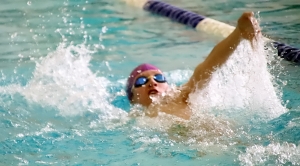 Lakeside’s Jack Van Valkenburg won the 200 individual medley and was the runner-up in the 500 freestyle. (Photo by Mark Brock)

Lakeside won its second consecutive title in the 200 freestyle relay (1:32.50) while winning the 400 freestyle relay (3:21.81) for the first time in 10 years. All fifteen medal performances by the Vikings were state qualifying times.

Second place Dunwoody was paced by Nicholas Bragg’s second career gold medal as he won the 100 butterfly (54.39). The Wildcats totaled six silver medals and two bronze on the way to the runner-up spot.

Decatur’s third place was fueled by one silver and four bronze medal finishes on the day.

Chamblee picked up the gold in the one-meter diving event as 2019 runner-up Andrew Stone took first with 337.95 points on his dives and four bronze finishes on the day. 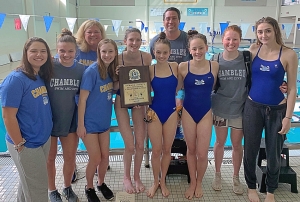 The Lady Bulldogs followed the Lakeside Vikings path to start the meet winning the first three swim events. A fourth consecutive victory in the 200 medley relay (1:54.25) for Chamblee opened the championships.

Sophomore Kyla Maloney won her third gold medal overall and first in the 200 freestyle (2:00.73) before going on to become a four-time gold medal winner later in the day with her second consecutive victory in the 100 backstroke (57.63). She also won the 500 freestyle in last year’s championships.

Freshman Evelyn Entrekin swam to her first gold medal taking the 200 individual medley (2:13.47). She would later come up just 0.05 seconds short of a gold in the 100 butterfly to pick up a silver medal.

Ten of the top three finishes for Chamblee were state qualifying times.

Second place Lakeside won the 200 freestyle relay (1:46.92) for the second consecutive year while also getting one silver medal finish and five bronze medals. 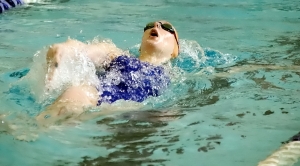 Dunwoody picked up two golds, two silver and one bronze on the way to their third place total. Dunwoody’s Lauren Davis won the one-meter diving event for the fourth consecutive year setting a new point total record of 492.35 breaking her own record of 466.65 set in 2018. Dunwoody teammate Avery Maxwell was second with 333.60 points.

See link below to see the Top 3 Results from the DCSD Swim Championships: