The Chamblee lady Bulldogs finished as the Class 4A-5A State Swim runners-up last weekend. They brought home 10 medals from the competition along with the second place team trophy. (Courtesy Photo)

Five golds, three silver and two bronze medals were collected by the Chamblee Lady Bulldogs swim team as they swam to a close second place finish in the GHSA Class 4A-5A State Championships this past Saturday at the Georgia Tech Aquatic Center.

Only seven other girls’ DeKalb swimmers have won more than four gold medals at state in their careers. Maloney also picked up her fourth and fifth gold medals in relay events. She teamed up with Anna Blankenship, Evelyn Entrekin and Lilly Smith to swim to gold in the 200-medley relay (1:45.30, All-American Consideration) which was the third consecutive state gold in the event for the Lady Bulldogs.

In the last event of the day, the team of Maloney, Entrekin, Blankenship and Catherine Smart captured the gold in the 400-freestyle relay (3:34.48) as the team won the event for the second straight year. 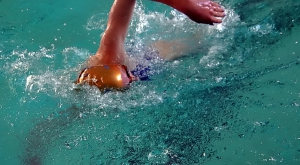 Catherine Smart, Annie Wahlen, Madeline Murphy and Lilly Smith teamed up to swim to a bronze medal finish in the 200-freestyle relay (1:40.88).

Class 6A Girls
Lakeside finished strong in the Class 6A Girls State Championships with a third-place finish (248) behind very strong competitors Lambert (544) and Cambridge (399) with a pair of silver medal finishes and a bronze on the day.

Sophia Hook claimed a silver in the 50 freestyle (24.06) and came up just short of a bronze in fourth place in the 100 freestyle (52.73). She then joined Katelyn McClintock, Phoebe Mansker and Anna Baldwin to swim to a time of 1:38.38 to take silver in the 200-freestyle relay.

Hook, McClintock, Mansker and Lyla Richards came up short of a medal in the 400-freestyle relay (3:36.05) finishing fourth.

Thomas Rice brought home the only medal for the Bulldogs as he grabbed silver in the 500 freestyle (4:46.43).

Class 6A
The Lakeside Vikings finished sixth in the team standings of the Class 6A Boys’ State Championships with two silver and three bronze performance on the day.

Craig Steinhauer performed well in the spring events taking silver in the 50 freestyle (20.97) and a bronze in the 100 freestyle (46.48) to score 41 points for the Vikings.

Class 7A
The Dunwoody Wildcats put together a Top 10 finish in the Class 7A Boys’ State Championships coming in ninth with 182.50 points.