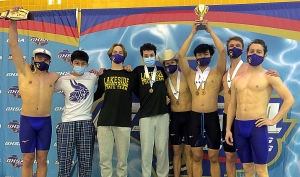 The Lakeside Vikings finished third in the Class 6A Boys State Swimming and Diving Championships.

A pair of Top 5 finishes came home to DeKalb County as both the Lakeside boys’ and girls’ swim and dive teams finished third recently in the Class 6A State Swimming and Diving Championships at Georgia Tech.

The Vikings put together 13 Top 8 finishes on the day to compile 282 points to come in third behind Johns Creek (408.5) and Dalton (304.5) for their second third place finish in the past three seasons. The Vikings finished third in 2019 and had not finished that high since 2006.

The 200 medley relay team of Chris Decker, Zachary Zhao, Jack Van Valkenburg and Craig Steinhauer kicked off the state meet with a bronze medal finish with a time of 1:34.30. 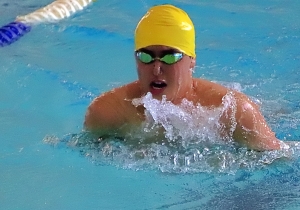 Zachary Zhao grabbed a bronze medal in 100 breaststroke at the Class 6A State Championships. (Photo by Mark Brock) 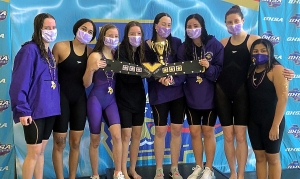 The Lakeside Lady Vikings picked up a third place finish in the Class 6A Girls State Swim Championships. 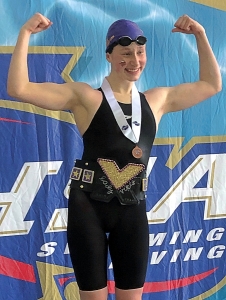 She also teamed up with Hook, Katelyn McClintock and Phoebe Mansker to swim to a bronze medal in the 200 freestyle relay (1:39.48).

CLASS 7A BOYS
The Dunwoody Wildcats earned a Top 15 finish in the Class 7A Boys’ State Swimming and Diving Championships at Georgia Tech with 105 points.

Dunwoody was led by a solid performance by Aiden Chen. Chen grabbed a silver medal in the 100 breaststroke (56.80) and a seventh place finish in the 200 individual medley (1:55.43).

Ryan Altera produced an eighth place time of 4:43.12 in the 500 freestyle for the Wildcats.