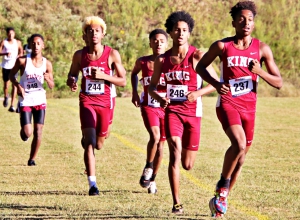 The Martin Luther King Jr. boys’ and girls’ cross-country teams came away with a sweep in the final DeKalb County regular season meet of the season at the Arabia Mountain High School course on Tuesday afternoon.

The Lions won their third race of the year placing five runners in the Top 7 finishes to cruise to a 23-72 win over Tucker. Redan followed in third with 76 points and in order came Lithonia in fourth with 86, Stephenson in fifth with 122 points and Arabia Mountain in sixth with 147 points.

Tucker put three runners in the Top 10 as Abdeleselam Korebo captured the individual title with a time of 20:16.32 ahead of the pair of King. Tucker’s Jeremiah Alibey (20:25.25) was fourth and teammate Braxton Broady (22:06.48) finished ninth.

The Lady Lions placed four runners in the Top 10 to outduel the Southwest DeKalb Lady Panthers 39-44 for the sweep. Stephenson (60) was third followed in order by Tucker (97) and Stone Mountain (99).

Southwest DeKalb took second and third in the individual standings as Jamea Lindley (27:23.81) and Kaila Wimes (28:30.85) came across.

The DCSD Junior Varsity Championships are set for Thursday (Sept. 30) at Druid Hills Middle School Course. The girls race begins at 5:15 followed by the boys at 5:55.

The DCSD Varsity Championships are rescheduled for Monday (Oct. 3) at the Druid Hills Middle School course. The girls race begins at 5:15 followed by the boys at 5:55.

See link below for the complete Week 6 results: