No. 1 Cedar Grove Hosts No. 2 Calvary Day in Class 3A Quarterfinals 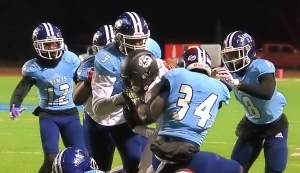 Cedar Grove’s Everett Roussaw (34) meets a Hebron Christian runner in the hole during the Saints 70-33 win last Friday night in which Roussaw also had an interception. Cedar Grove hosts No. 2 ranked Calvary Day on Friday at 8:00 pm. (Photo by Mark Brock)

A battle of the top two ranked high school football teams in Class 3A is set for Friday at 8:00 pm at Godfrey Stadium as the No. 1 ranked Cedar Grove Saints host the No. 2 ranked Calvary Day Cavaliers in a game set to be televised on Peachtree TV.

Cedar Grove (9-2) is coming off a 70-33 victory over Hebron Christian in the second round of the state playoffs as they put up 300 yards rushing for the second consecutive playoff game.

The ground attack was led by Boden Walker (12 carries, 157 yards, 1 TD) who for the second game in a row scored on his first touch of the game going 65 yards for the opening touchdown. Boden is one yard away from the career 1,000-yard rushing mark. DeMarcus Smith added 13 carries for 100 yards.

Sophomore EJ Colson moved over the career 3,000 yards passing milestone with his 240 yards on 16 of 20 passing with 5 touchdowns against Hebron Christian in the second-round win.

Colson connected with Miami Jones seven times for 91 yards and a pair of touchdowns and Barry Jackson for two touchdowns and 54 yards on just two receptions. Jackson has surpassed the career 1,100 yards receiving mark this season with his 40 receptions and 754 yards and 7 touchdowns on the season. 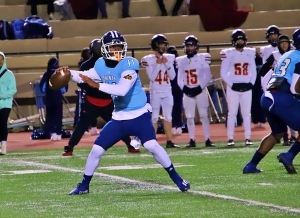 Cedar Grove quarterback EJ Colson became DeKalb’s 45th passer to go over 3,000 yards in a career with his 240 yards passing against Hebron Chrisitian. The freshman is 44th overall in DeKalb history. (Photo by Mark Brock)

The top leaders on the ground for the Cavaliers are Antonio Butts (640 yards, 15 TDS) and Trevor Strowbridge (429 yards, 4 TDs).

The Saints are vying to advance to the semifinals for the seventh time in eight seasons after winning their sixth region title in the past seven seasons. Cedar Grove is also trying to defend its 2021 Class 3A state crown in going for a fifth title in seven seasons.