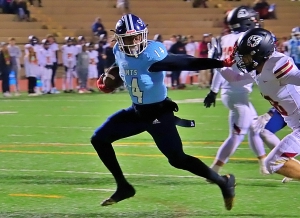 Cedar Grove’s Barry Jackson (14) wards off a would-be tackler to score the first of his two receiving touchdowns on the night. Jackson and Saints defeated Hebron Christian 70-33 on Friday night at Godfrey Stadium. (Photo by Mark Brock)

Three Cedar Grove Saints scored two touchdowns apiece in a 70-33 rout of the Hebron Christian Academy Lions in the second round of the Class 3A high school football state playoffs at Godfrey Stadium on Friday night.

Boden Walker was one of three to score twice as he opened the second-round playoff game just as he did the opening round 48-7 win over Bremen taking his first touch of the game to the house down the left sideline 65 yards into the end zone. Amare Forte hit the first of six PATs for him in the game.

Jakyre Horton stopped the ensuing Hebron drive as he stepped in from of a Gavin Hall pass at the Saints eight-yard line and returned it to the Cedar Grove 21. Nine plays later Quinterio Lawson made it 14-0 with Forte’s PAT as he scored on a four-yard run.

Cedar Grove got the football back at the Hebron 35 as they pressured a punt that went out of bounds. Three plays later Barry Jackson ran across the middle and EJ Colson threw a strike that Jackson turned into a 32-yard score (his first of two) evading several would be tacklers on his way into the end zone. Forte made the PAT to make it 21-0.

The Lions got on the board via an 18-yard pass play from Hall to JT Hornick open at the goal line to pull within 28-7 with 11:29 to play in the first half.

Cedar Grove answered right back with not only one score but two to extend the lead to 35-7. Colson connected with Miami Jones for the first of two times on the day as the threw across the middle for a six-yard touchdown. Everett Roussaw set up another quick score as he intercepted a pass at the Hebron 31. Two plays later Colson and Jackson hooked up on the left sideline for their second collaboration, this time for 21 yards and the score. Cedar Grove had a 35-7 commanding lead with 9:50 left in the first half.

Hall ran in a 37-yard touchdown after a pair of facemask penalties helped Hebron move the ball into Cedar Grove territory.

The Saints (9-2) answered again on the second Colson to Jones touchdown of the game, this time for 21 yards with Jones running left to right across the field to score. Christian Orozco hit the PAT, one of four on the night for the senior to make it 42-14. 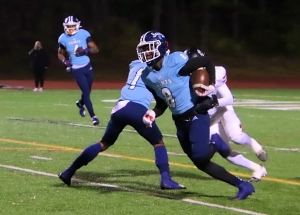 Jakyre Horton returns the first of his interceptions against Hebron Christian. Horton returned on 60 yards for a touchdown. (Photo by Mark Brock)

Hebron pulled the Saints within striking distance with a pair of touchdowns in the final two minutes of the first half. Hall finished off a 42-yard drive with a two-yard touchdown run, but the PAT was no good. Cedar Grove was driving when a Colson pass sailed high, and Jake Redman picked off the pass and returned it 94 yards for the score to pull Hebron within 42-20.

The Saints came out focused in the second half marching down the field in eight plays to go up 49-26. Colson rolled right and with defenders in his face reversed field where he found Walker all alone in the left flat for an easy score.

Hebron muffed the kickoff and had to start on their won 10. After driving out to their own 25, Hall let fly with a pass down the middle that ended up in the hands of Horton for his second pick of the night. He took this one 60 yards into the end zone to make it 56-33.

Hall ripped off a 25-yard run to the Cedar Grove four where a defender knocked the ball loose and in the mad scramble offensive lineman JT Sperring recovered for the Hebron touchdown to pull them within 33-56.

Jones finished with 7 receptions for 92 yards and the two scores. Cedar Grove put up 555 yards of total offense and 10 touchdowns. Hebron ran for 237 yards with Hall carrying for 200 of it and also throwing for 110 yards and a touchdown.

The Saints move onto the quarterfinals to host undefeated Calvary Day (11-0) who won 51-41 over Daugherty on Friday. The game will be played at Godfrey Stadium at 7:30 pm.

Ware Co. 24, Chamblee 7
The Chamblee Bulldogs took a 7-3 lead into the half against No. 1 Ware County (11-0) before the Gators put up 21 in the second half to take a 24-7 win that eliminated the Chamblee from the Class 5A state playoffs.

Chamblee finishes 8-3 on the season. The Bulldogs had gone 1-8 four years ago but returned to the state playoffs this year for the first time since 2007.

Cedartown 48, Stephenson 16
The Stephenson Jaguars never got on track against the No. 1 ranked Cedartown Bulldogs as they fell 48-16 in their Class 4A second round playoff game at Cedartown.

Stephenson score all of its points in the fourth quarter but it was too little too late. The Jaguars finish 7-4 as their return to the state playoffs after missing a year ago falls short.