Cedar Grove’s Demarcus Smith races 57 yards for a touchdown to put the Saints up 24-0 in the fourth quarter of their Class 3A quarterfinal victory over Calvary Day. (Photo by Mark Brock)

Cedar Grove shut down a potent Calvary Day offense in a 30-0 Class 3A quarterfinals game between the top two ranked teams in Class 3A high school football.

Calvary Day (11-1) came into the game averaging 46 points per game only to have the Saints (10-2) defense hold them to no points and only 137 yards of offense.

The Cedar Grove offense got things rolling as the Saints took the opening kickoff and started a 16-play, 83-yard drive that knocked off 7:16 on the clock as EJ Colson followed a fake to running back Demarcus Smith by tucking and running behind his back into the endzone for the touchdown. Amari Forte hit the extra point to put the Saints up 7-0 with 4:40 to play in the opening quarter.

Calvary Day marched won the field on t heir first possession to reach the Cedar Grove 15 facing a second down and five-yards-to-go situation. The Cavaliers were facing a fourth and 14 when Everett Roussaw and Quinterio Lawson sacked quarterback Jake Mecklinger for a three-yard loss to get the ball on downs.

Cedar Grove put together a 17-play drive on their possession that resulted in a Forte 27-yard field goal to up the lead to 10-0 with 4:40 left in the opening half.

The Saints defense which held the Cavaliers to 45 yards of total offense in the first half came up big by forcing Calvary Day to punt. Joseph Slaughter broke through to block the punt and set the Saints up in business at the Cavilers’ 33.

On the fourth play of the drive Colson rolled right away from pressure and threw a strike to Barry Jackson right at the pylon on the front right pylon where Jackson caught the ball and stepped into the endzone. Forte was good again on the PAT to make it a 17-0 game with 2:22 left in the half.

The third quarter was pretty uneventful with no scoring when Calvary Day got the ball with 3:53 remaining and marched to the Saints’ seven-yard line as the quarter ended. 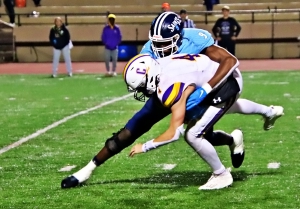 Cedar Grove’s defense came up big on the next three plays with Lakhi Roland, Quinterio Lawson and Adonijah Green coming up big for the Saints to force a 33-yard field goal attempt. Jakyre Horton jumped the snap and came flying through to block the field goal attempt.

Cedar Grove needed just four plays to extent its lead to 24-0 with 7:31 remaining in the game.

The Saints forced their second stop on downs on what would be Calvary Day’s last possession as they pressured Merklinger into a bad pass.

Cedar Grove took over at their own 48 and began running the clock down before big back Jakari Ponder took the handoff from the quarterback and broke a couple of tackles while running the 19 yards into the endzone as the final buzzer sounded to make the final of 30-0.

EJ Colson hit on 17 of 20 passes (including hitting his first 11 of the game) for 183 yards and a touchdown to lead the Saints. He also had a rushing touchdown. Demarcus Smith finished with 92 yards on nine carries with 1 touchdown for the Rebels

Barry Jackson caught seven of Colson’s passes for 82 yards and a score.

Cedar Grove (10-2) moves into the Class 3A semifinals for the seventh time in eight seasons, including four state championships. The Saints host the Oconee County Warriors (9-4) who knocked off Carver-Columbus 14-6 on Friday night to advance.