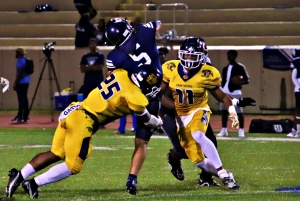 Southwest DeKalb’s Isaiah Scott (25) and Wesley Brown (11) get pressure on Redan quarterback Daemon Jones during the Panthers’ 55-6 win in the long-running rivalry. (Photo by Mark Brock)

The Southwest DeKalb Panthers upped their mark against DeKalb County rivals Redan Raiders to 35-2 with a 55-6 victory at Hallford Stadium on Friday night.

Billy Johnson capped a 39-yard, seven-play drive for the Panthers (2-3) following a short punt by Redan (1-3) beating the Raider defense on a seven-yard run to the pylon on the left corner of the end zone to open the scoring. Ezekiel Babara hit the first of his seven PATs on the night to make it 7-0.

The Panthers built a 27-0 lead at the half behind two touchdown runs by Jacob Moore (2 and 7 yards) and a one-yard sneak by Isaiah Logan.

Freshman Josh Jones made it 34-0 by returning the second half kickoff 88 yards for the touchdown and Babara tacked on the PAT.

A big kickoff return by Redan set up a 16-yard touchdown run by Xavian Green to put the Raiders on the board with 11:13 left in the third period. 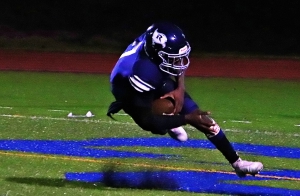 Redan’s Quintavious Roland just missed on an interception in the first half of his team’s loss to Southwest DeKalb. (Photo by Mark Brock)

The third quarter had just over eight minutes remaining when Southwest DeKalb quarterback threw to the right flat to Marcello Lucas who wound his way through the Redan defense for a 30-yard score. Babara’s PAT made it 41-6.

Isaiah Scott and Brishaun Reed both scored fourth-quarter rushing touchdowns to close out the game. Babara finished 7-7 on PATS with the two in the fourth quarter.

Southwest DeKalb’s defense held Redan to just 52 yards of total offense with 16 of that coming on Green’s touchdown run.

Dunwoody 48, Northview 0
Jordan Wade opened the game with a 69-yard touchdown run to jumpstart the Dunwoody Wildcats to their second consecutive shutout victory in a 48-0 road victory over the Northview Titans last Friday night.

The Wildcats (3-1)would only punt once in the game with that coming in the fourth quarter as they rolled up 451 yards of total offense and held Northview (1-3) to just 85 yards on the night.

Wade had a short night finishing with just seven carries for 100 yards and the touchdown along with a 20-yard touchdown reception.

Dunwoody’s defense was led by Jackson Wilcox with 10 tackles (7 solo, 3 assists) and Luke Phillips with four tackles for a loss including a sack.

Chamblee 55, Riverwood 23
Two big non-offensive plays in the first quarter got the ball rolling for the Chamblee Bulldogs (3-1) in a55-23 win over Riverwood (0-4) at North DeKalb Stadium on Friday night.

The first play came on defense as linebacker Jack Hawkins returned a pick-6 30 yards on the third play of the game. Later in the first quarter Jordan Thornton blocked a punt and recover it for a touchdown.

Quarterback Fabian Walker was the catalyst for the offense once again pass for 204 yards and three touchdowns and running for a fourth. Thornton had six receptions for 107 yards and touchdown to go with his blocked punt for a touchdown.