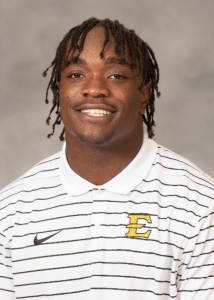 Following a redshirt Covid year and an injury shortened year East Tennessee State linebacker Chandler Martin is returning to the form Arabia Mountain Rams and DeKalb County football fans saw during his high school years as he was named the Southern Conference’s Defensive Player of the Week.

The Lithonia native exploded for 23 tackles in East Tennessee’s 20-17 loss to The Citadel on September 10. Martin entered the game with just 13 total tackles in nine games played and broke a 29-year-old record of 22 for East Tennessee set by Nakia Thomas in a 1993 game against Appalachian State.

The redshirt freshman had three solo tackles and 20 assists, including one tackle for a loss. The record-breaking tackle came on the Citadel’s final drive of the game as Martin was in on at least six tackles per quarter. The 23 tackles came up one short of the Southern Conference record of 24 held by Western Carolina’s Rock Williams on October 13, 2012, also against The Citadel. 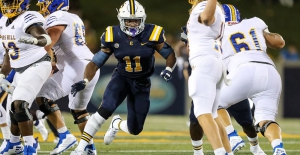 East Tennessee State linebacker Chandler Martin (11) rushes a passer. The Arabia Mountain alum had 23 tackles to set a new school record in a game against The Citadel.

The 23 tackles are tied for the most by an FCS and FBS player this season as Delaware’s Johnny Buchanan had 23 against Navy on September 3.

“Chandler is a great kid and comes from a great family,” said Martin’s former head coach at Arabia Mountain Stanley Pritchett. “He is a hard worker and a good student. I am not surprised he had that kind of game. He always had a nose for the football.”

Martin led the Rams with 108 tackles in 2019, including 15 for a loss, while also playing running back and leading the team in touchdowns. He was also an Honor Roll Student all four years at Arabia Mountain.

He is the son of Jeff and Sherlonda Martin.