Stephenson, Tucker Lock Up for Just the Eighth Time in DeKalb Rivalry 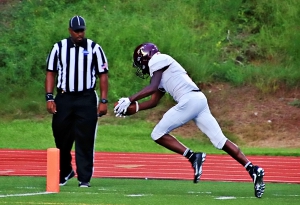 Tucker junior receiver Hasaan Sykes stretches for the end zone for a touchdown against Miller Grove earlier this season. Sykes has 202 yards receiving and a pair of touchdowns as the Tigers stand at 2-2 on the season. (Photo by Mark Brock)

Two of DeKalb County’s perennial playoff teams face off for just the eighth time as the Tucker Tigers host the Stephenson Jaguars looking to even the series in a 7:30 high school football matchup on Friday night at Adams Stadium to headline the slate of five games at DeKalb Stadiums.

Tucker (54-41) and Stephenson (20-21) are a combined 74-62 in a combined 61 state playoff appearances with both having long playoff strings ended last season as both teams missing the playoffs in the same year for the first time since 1997. This year also marks the first time that neither team has been ranked coming into the rivalry.

Stephenson head coach Marcus Jelks is going for his second consecutive victory over the Tigers while Tucker’s Lonnie Jones gets his first taste of the rivalry.

Tucker got a 223-yard rushing and one touchdown performance from Jordan McCoy in last week’s 51-20 loss at McEachern to fall to 2-2 on the season. Stephenson is 1-2 and looking to rebound from a tough 32-27 loss to Carver (Atlanta) at Lakewood Stadium two weeks ago. Running back Devin Ingram had 107 yards rushing and a pair of touchdowns in the loss.

Lakeside vs. Dunwoody
In another all-DeKalb matchup on Friday night, the Dunwoody Wildcats (3-1) host the Lakeside Vikings (3-1) at 7:30 in the 27th meeting between the two DeKalb football programs.

Coach Morris Starr’s Vikings started the season 3-0 for the first time since 2003 before falling to a surprising Osborne team two weeks ago. Receiver Asher Linn leads the Vikings with 219 yards receiving on 9 receptions with four touchdowns in the first four game. Senior linebacker Luke Chilton leads the defense with 50 tackles (37 solo, 1 sack, 1 tackle for a loss).

The Wildcats 3-1 record is the best since the 2008 team went 10-0 in the regular season. Quarterback Porter LaDoyen has four passing touchdowns and six rushing touchdowns in accounting for 912 yards of total offense to lead the Wildcats offense along with running back Jordan Wade (100 yards rushing and a touchdown, 20-yard touchdown reception against Northview).

Dunwoody’s defense has shutout its past two opponents and is led by defensive lineman Luke Cole with 33 tackles (4 sacks, 6 tackles for loss) along with two fumbles caused, one recovered and a blocked punt for a safety.

McNair vs. Columbia
The No. 8 ranked Columbia Eagles open the Region 5-3A slate for 2022 by hosting the McNair Mustangs at Avondale Stadium on Friday at 7:30.

Both teams are coming off a bye week as they enter region play. McNair (2-2) is riding its first back-to-back wins since the opening two games in 2018. The Mustangs are led by versatile athlete Malachi Jackson who has six touchdown receptions, and two kickoff returns for scores on the season.

Columbia (3-1) had reeled off three consecutive wins to open the season including a big road upset of Class 7A Camden County in the season opener. The Eagles lost to No. 1 ranked Cartersville in their last outing before the bye and are regrouping to make a run in the Region 5-2A race. Senior Royce Tolbert’s 290 yards rushing, and two touchdowns leads a group of backs that have combined for almost 900 yards on the season and seven touchdowns.

Thursday Night Games
There are two DeKalb teams playing away games on Thursday night this week.