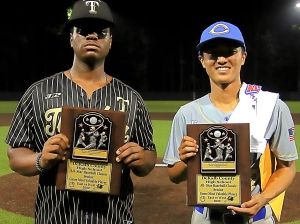 Leading 3-2 heading into their half of the second inning the East Seniors pushed eight runs across the plate as five West errors along with some timely hitting expanded the lead to 11-2.

Errors led directly to four runs along with a wild pitch to go with back-to-back RBI doubles by Emory Guilford (Tucker) and Davion Graham (SW DeKalb) as the East took full advantage in the inning.

Chamblee’s Tyler Sun took the mound in the third inning to shut down the East offense for the next four innings. Sun allowed a baserunner in each of the four innings, but with help from his defense including a double-play and two nice throws by catcher Nick Akins to cut down runners trying to steal second helped keep the East off the scoreboard the rest of the way.

The West picked up a run in the fourth as Andre Speight (Columbia) walked, stole second and third and went home on a throwing error. Two more runs came in the seventh on an inside-the-park homerun by Demetress Broughton (Towers) and an RBI groundout by Jayden Alexander (Columbia) to score Cody Akins who had doubled and stolen third.

Michael Faustin (SW DeKalb) came on to get the final out to close out the game for the East.

The West Seniors started off the game taking a 2-0 in the top of the first inning. Isaac Terrell (Lakeside) had walk to start the game, stole second and third and scored on a wild pitch to make it 1-0. Reeve Walden (Lakeside) walked and scored on a grounder to the right side by Sylvester Baggett (Towers) for the 2-0 advantage heading to the bottom half of the first inning. 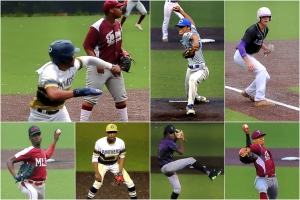 East’s first three batters of the first inning all reached after being hit by a pitch. Jaylen Williams (Arabia Mountain) came in to score on an error while stealing third and Casey Winfrey crossed the plate following a wild pitch. Guilford hit the first of his two doubles on the night to plate Rod Brown who had the first hit of inning to put the East up 3-2.

Chamblee’s Tyler Sun picked up the West MVP honor after shutting down the East offense over the final four innings with four strikeouts and no walks. Sun was the ninth Bulldog in the 19-year history of the event to earn the honor.

Chamblee’s nine MVPs leads the way in the event with 13 schools being represented along the way. Redan is second with five while Columbia has brought home four awards.

See links below for box score and All-Star Classic records: