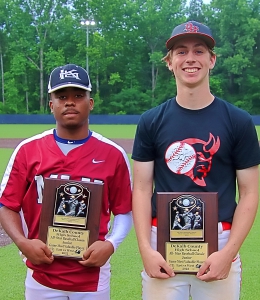 After tying the game at 2-2 on Bobby Rivers (Chamblee) sacrifice fly in the top of the second, the West put the first five batters on base against East reliever Artez McDowell (SW DeKalb) and all five would come across the plate.

Lapedrick Grissom (Columbia) was hit by a pitch and Devon Moyer (Lakeside) and Noah McMahon (Decatur) drew walks to load the bases. Cullen Riel (Druid Hills) came up next and slapped a single up the middle to score two runs as the West took the lead for good.

Three wild pitches with runners on third led to three more runs more runs and reliver Raymond Clark walked his first batter before getting the next three batters to end the inning. He struck out two and gave up an RBI groundout to Jack Albright (Lakeside) as the lead grew to 8-2.

Both teams went the next couple of at bats without scoring until the bottom of the fifth when the East struck for three runs around a lightning delay. The big blow for the East was a two-out, two-run double by Nate Flemister (M.L. King) as the gap narrowed to 8-5.

The West tacked on an insurance run in the top of the sixth inning on a RBI single by Nitin Rao (Lakeside) to score Towers DeShawn Broughton who had singled and stole second.

McMahon who had come into the game following the lightning delay finished off the game facing four batters in the bottom of the sixth as the umpires called the game due to time. 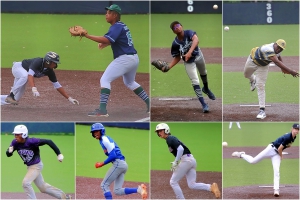 The West got on the board first in the top of the first inning as Broughton tripled to lead off the game and scored on a wild pitch. The East countered in the bottom of the opening frame on a two-run homer just inside the left field foul pole by Ayden Jones (Tucker) to take a short-lived 2-1 lead.

Cullen Riel was named the West MVP after going 2-3 with a walk, two RBI and scoring a run in the game. Martin Luther King’s Nate Flemister took the East MVP honors going 2-3 with a double, 2 RBI, 3 stolen bases and scored a run.

The Most Valuable Player honors by this year’s two players gave Druid Hills and Martin Luther King their first MVP honorees in the 13-year history of the Junior All-Star Classic. The West now leads the series 7-2 with the East’s last win coming in 2017.

Arabia Mountain, Stephenson and Redan lead MVP honors with three each over the years. The addition of Druid Hills and Martin Luther King makes it 14 different schools to have a player named MVP in the game.

See links below for box score and All-Star records: