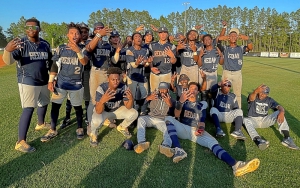 Redan advances to the baseball state championship for the first time since winning the title in 2013. They will face Pike County at Coolray Field in Lawrenceville in a 5 pm doubleheader on Monday.

The Redan Raiders finished off their Class 3A State Semifinal best-of-three series with a 6-1 deciding-game victory on the road over Pierce County on Tuesday night to advance to the Class 3A State Championship.

An errorless game in the field, a dominating pitching performance by Daniel Ortiz on the mound and clutch hits at the plate propelled the Raiders to the series clinching win.

Redan got on the board first with a solo home run in the second by Anthony Mateo to make it 1-0. Bernard Moon added to the lead with a solo shot of his own (his eighth homer of the state playoffs) in the third inning to make it 2-0.

The game was 2-1 heading into the top of the seventh when the Raiders (28-6) struck for four insurance runs behind the bats of Moon and Tionne Witherspoon. The pair drove in two runs in the inning to extend the lead to 6-1.

Ortiz wrapped up the complete game on the mound by stifling the Pierce County bats in the bottom of the seventh to send the Raiders to the state title game. Ortiz allowed just one run and four hits along with one walk while striking out three in the win.

Moon, a Troy University commit, was 2-3 with three RBI to go with his eighth playoff homerun. Manolo Parcels added a pair of hits as the Raiders had nine in the game. 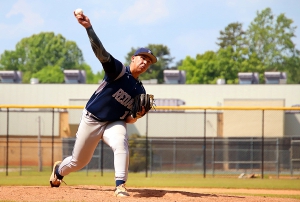 Redan pitcher Deniel Ortiz allowed just one run and four hits in a complete game 6-1 win over Pierce County to send Raiders to the Class 3A State Championship series. (Photo by Mark Brock)

Redan dropped the opening game of the series at Pierce County (30-7) in a tough 6-5 loss as a seventh inning double-play ended the Raiders rally.

The Raiders bounced back in a big way in the second game on Monday taking an 11-5 victory over the Bears (30-6). Redan jumped out to an early 3-0 lead only to have the Bears knot the game at 3-3 in the third.

Redan answered in the fifth inning with seven runs to go up 10-3 and would add a run in the bottom of the sixth to take an 11-3 lead into the final at bat for Pierce County.

Pierce picked up a pair of runs before Redan shut the door for the 11-5 win to even the series.

Anthony Mateo went the distance for the Raiders allowing 11 hits and just two earned runs to get the win. Jason Avila had four RBI and a triple to lead Redan at the plate.

Pike County advanced with a 5-2, 9-2 sweep of defending state champion North Hall on Monday. Redan is in the state title game for the first time since winning the Class 4A championship in 2013.