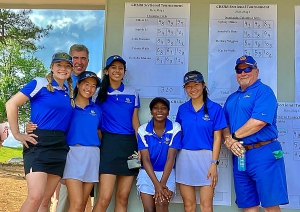 The Chamblee Lady Bulldogs and Druid Hills’ Davis Hall put the finishing touches on the 2022 golf season participating in the GHSA State Golf Tournaments on Monday and Tuesday.

Chamblee finished an exciting season with a 12th place finish in the Class 5A girls’ tournament at Okefenokee Country Club in Blackshear.

After advancing out of the Area and State Sectional Tournaments in nail-biting fashion, the Lady Bulldogs state tournament performance was less drama filled as they fell to 12th on the final day at Okefenokee.

Sophie Li was the leader on the first day for Chamblee shooting a 107 followed by her older sister Olivia Li at 108. Trinity Walls scored a 134 to round out the first round 347. Deeksha Khanna finished with a 133 on the first day and Julia Mansour was at 134.

Olivia Li knocked six strokes off her first-round score to tally a 102 and finish in a tie for 36th in the individual standings at 210 for the tournament. Sophie Li dropped to a 115 in the second round to close out the tournament in tie for 43rd with a total of 222. 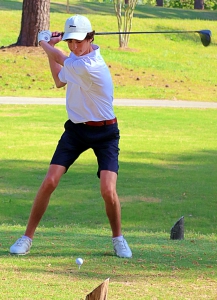 Druid Hills’ Davis Hall finished tied for 50th at the Class 4A State Golf Tournament with an 87-92–179 earlier this week. (Photo by Mark Brock)

CLASS 4A BOYS
Druid Hills’ Davis Hall qualified out of Area as the low individual not on a qualifying team to advance to the Class 4A State Tournament at Houston Lake Country Club in Perry this week.

Hall opened the tournament with a first round 87 and followed up with a 92 in the second round for a 179 total to tie for 50th overall in the individual standings.