Lady Wildcats Advance Past Hillgrove into Class 7A Soccer Elite 8 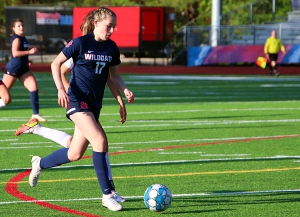 Dunwoody’s Lindsey Lampron dribbles down the field during second half action of Dunwoody’s 2-1 Class 7A girls’ soccer playoff victory. Lampron scored both goals for the Lady Wildcats in the win. (Photo by Mark Brock)

Lindsey Lampron scored two goals to lead the No. 4 ranked Dunwoody Lady Wildcats to a 2-1 Class 7A Sweet 16 victory over the No. 7 ranked Hillgrove Hawks at Dunwoody on Monday night.

Lampron, a sophomore, made a steal from a Hillgrove defender, spun away with the ball and beat Hillgrove’s keeper Ella Noren for the second time in the game with 24:22 to play to break a 1-1 tie for the 2-1 lead.

Hillgrove upped the pressure over the final 24 minutes forcing three saves by Dunwoody goalie Ella Holland at the 21:45, 11:04 and 8:48 marks that kept Dunwoody in the lead.

The Hawks (12-4-1) came off a free kick with a pass outside and a shot went just wide right that would have tied the game with about four minutes to play.

Dunwoody down two players in the game to prior injuries was able to keep the ball out of their end for most of the final four minutes to hold on for the win.

The Lady Wildcats (16-3) jumped in front just three and half minutes into the game as Lampron took a pass from Sarah Holland and put the ball past Noren to make it 1-0 in the early going.

Ella Holland, who eight saves in the game, had four saves along the way as Dunwoody maintained its 1-0 lead until the 8:21 mark of the first half.

A slow roller off the foot of Hillgrove’s Molly MalleBranche found its way into the left corner of the goal to knot the game at 1-1 going into halftime.

Dunwoody advances to face Tuesday night’s winner between No. 2 ranked Brookwood (16-2) and No. 10 ranked West Forsyth (14-3) on Monday (4/25). If West Forsyth wins Dunwoody would host and if Brookwood wins there would be a coin flip for home field.