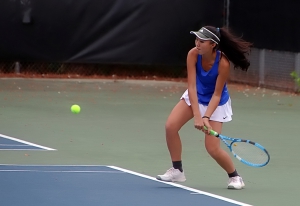 The Chamblee Lady Bulldogs won three matches before the Cartersville Lady Hurricanes could put up a victory to close out a 3-0 Class 5A first round girls’ state playoff match at Georgia State – Dunwoody on Monday afternoon.

Chamblee’s Sophia Cheng set the tone quickly blowing past Cartersville’s Madison Feydon 6-0, 6-0 at No. 3 singles to put the first point up for the Lady Bulldogs.

The No. 1 doubles team of Ananya Jatar and Kennedy Talbert swept two sets from Cartersville’s duo of Mason Cline and Mia Shaw by a score of 6-2, 6-3 to make it a 2-0 start for Chamblee. Jatar and Talbert got their fourth break against on in the second set to close out the match.

Allison Lvovich finished off the match for Chamblee winning 6-3, 6-2 over Cartersville’s Katie Lewis. Lvovich broke serve five times in the match against Lewis, including the final game of the match.

Chamblee faces the winner of Woodward Academy and Wayne County in the Sweet 16. 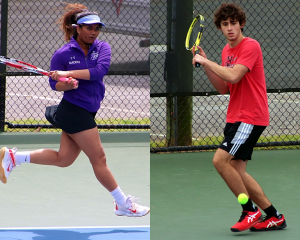 CLASS 4A
Druid Hills dropped both its boys’ and girls’ matches in the Class 4A first round they hosted at the DeKalb Tennis Center on Monday afternoon.

The Red Devils (7-8) dropped a tough 4-1 decision to the Jefferson Dragons (12-8) in boys’ action as two of the singles matches went three sets and the third was a tight two-set affair.

Druid Hills’ Chase Wainscott was the lone winner on he day as he took a three-set win over Jefferson’s Ethan Duke. Jefferson picked up a three-set win at No. 1 singles as Aaraon Eason outlasted the Red Devils’ Evan Mast.

Levi Press dropped a close two-sets to none match at No. 2 singles to Jefferson’s Jacob Meissner.

In the girls’ match, Flowery Branch (12-3) rolled to an easy 3-0 victory over Druid Hills (4-8) to open the day at the DeKalb Tennis Center courts.

Flowery Branch grabbed the early 1-0 lead as Sandra Hernandez swept a 6-0, 6-0 decision against Druid Hills’ Shanti Rodriguez-Pedrazza at No. 1 singles.

The No. 1 doubles tandem of Ally Shedd and Haley Barsinger eased to a 6-0, 6-1 win over Druid Hills’ Ella Zedd and Katy Burkett to make it 2-0.

Violet Schultz and Richey Nguyen closed out the match with a 6-0, 6-0 win over Druid Hills’ Sarah Zedd and Shaelen Purdy.

CLASS 3A BOYS FIRST ROUND
Redan at Cherokee Bluff, TBA