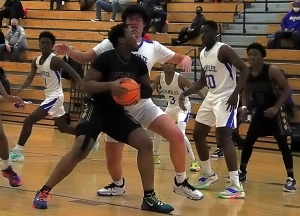 Southwest DeKalb’s Nixon Stewart (with ball) works inside against Chamblee’s Eli Star. Southwest DeKalb came out on top in overtime 57-55 against the Bulldogs. (Photo by Mark Brock)

Kourtney Forrest’s basket in the lane with eight seconds left in overtime propelled the Southwest DeKalb Panthers to a 57-55 Region 5-5A road win over the Chamblee Bulldogs on Tuesday night.

A late turnover by the Bulldogs (9-5, 4-4) had given the Panthers the basketball with 37.7 seconds to play. Southwest coach Eugene Brown called timeout.

Coming out of the timeout the Panthers held the ball for the last shot with game tied at 55-55. Forrest set up at the top of the lane and rolled into the lane as the clock winding. He took the pass inside and turned for a short shot in front of the goal for the game-winner that put the Panthers back ahead 57-55.

Chamblee had a chance to tie as time was running out, but a shot from near the foul line bounced off the rim and Southwest DeKalb’s Savion Mathis secured the rebound to seal the win as the buzzer went off.

The Panthers (11-4, 6-0) jumped to a quick 9-0 lead on consecutive three-pointers by Morgan Johnson, Forrest and Jordan Sanders on the way to a 30-26 lead at the half. Chamblee’s Douglas Liggions hit a three-pointer late in the first half to trim the lead to the four-point margin heading into the break.

Bryson Fleming led a second half rally for the Bulldogs who trailed for the for almost a full 31 minutes of the game. Fleming scored eight third quarter points to pull the Bulldogs within one point of the Panthers at 39-38 with 2:57 to play in the third quarter.

Forrest was again key for the Panthers as his drive and basket with three seconds left in the third period sent the Panthers into the fourth quarter up 45-40.

Matthew McMillian opened the fourth quarter with six quick points to pull Chamblee within 47-46 with 3:51 to play. With 1:41 to play in regulation McMillian hit a pair of free throws to pull the Bulldogs even for the first time since the start of the game at 48-48.

Fleming had a layup and a free throw with just over a minute to play to put Chamblee up 51-48. Southwest got a free throw from Forrest and two more from Xzaviah Taylor to tie the game at 51-51 with 26.2 seconds to play.

The Bulldogs ran the clock down and got the foul call on a three-point attempt by McMillian with 0.3 seconds to play. All three free throw attempts bounced around the rim and fell off to send the game into overtime.

Fleming put the Bulldogs ahead to start the overtime with a short pull up and the lead went to 55-51 on Zayd Fisher’s layup on a feed from Fleming with 3:12 to play.

Trailing 55-53 the Panthers went to the boards hard, but Chamblee’s Eli Star blocked two shots and got a pair of rebounds before a foul put Jordan Sanders at the line for two free throws. Sanders sank both to tie the game and Panthers’ defense got the ball back to set up the winning play by Forrest.

Forrest finished the night with a game-high 22 points and teammate Sanders added 10. Chamblee was led by Fleming’s team high 15 points and 12 more by McMillian. Thomas Dansue had eight points and 13 rebounds for the Panthers. 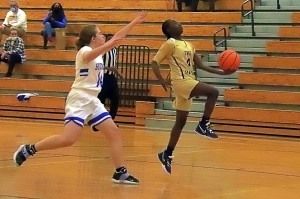 GIRLS
Southwest DeKalb 59, Chamblee 39
The Southwest DeKalb Lady Panthers made a clean sweep as three players led by Alex Jackson scored in double figures on the way to a 59-39 Region 5-5A win over the Chamblee Lady Bulldogs.

Chamblee got out to a fast start going up 6-2 behind baskets by Talaya Terry and Trinity Walls and a pair of Alana Azeta free throws with 4:16 to play in the first quarter.

Southwest DeKalb rallied quickly as Jackson started a 15-3 run to end the first period on the way to a 17-9 advantage heading into the second quarter.

Fifteen second quarter turnovers proved to be the undoing for Chamblee (6-7, 3-4) as Camille Files layup on a steal and assist by Janiya McCoy started another big run for the Panthers (7-4, 6-0) as the lead ballooned to 28-16 behind a pair of Aalon Turner baskets.

Londyn Durden’s basket to end the half sent Southwest to the locker room up 32-18.

Jackson had 16 points to lead the Panthers while Aalon turner added 14 points and McCoy 11. Alana Azeta had a game-high 18 points and 7 rebounds to lead Chamblee.