Wolverines Hold Off Jaguars for Region 6-4A Split 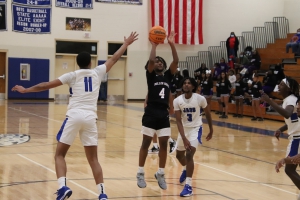 Miller Grove’s Mekhi Mathis (4) pulls up for a jumper between Stephenson’s Ashton Latimer (11) and Nasir Hargrove (3) during Miller Grove’s 58-51 Region 6-4A win at Stephenson. (Photo by Mark Brock)

Clutch free throws down the stretch helped the Miller Grove Wolverines hold off a furious fourth quarter rally by the Stephenson Jaguars on the way to a 58-51 Region 6-4 win at Stephenson on Friday night.

The win earned Miller Grove a split in the doubleheader after the Stephenson Lady Jaguars knocked off the Lady Wolverines 56-40 in the girls opener.

Mekhi Mathis and David Brooks combined to hit seven of eight free throws in the final 1:26 of the game to hold off the comeback attempt by Stephenson.

Stephenson had used an aggressive press in the fourth quarter to force eight Wolverine turnovers as they continued to chip away at what was once a 23-point lead by Miller Grove with 3:36 to play in the third quarter.

A three-pointer by Xavier Lewis with 3:36 to play gave the Wolverines a 42-19 lead and they appeared to be in control. The Jaguars jumped into their press forcing several turnovers at that point. Nasir Hargrove’s steal and dunk with 30 seconds left in the quarter had the Jaguars within 13 late in the period.

Kaidyn Montfort hit a buzzer-beating layup to end the period to give the Wolverines (10-5, 3-1) what looked like a comfortable 46-31 advantage with a quarter to play.

Ashton Latimer had a pair of back-to-back offensive put backs near the six-minute mark of the fourth quarter to cut the Miller Grove lead to 10 at 48-38.

A 6-0 run aided by several forced turnovers by the Jaguar defense cut the lead to five (49-44) with 4:57 to play. Stephenson got two free throws each by Tahj Evans and Latimer and a layup by Christian King off a steal by Evans to close the gap.

Hargrove got a put back with 1:57 to play to again cut the lead to five (51-46) and another turnover gave the Jaguars the opportunity to cut the lead to two, but a three-point shot bounced off the rim into the hands of the Wolverines.

Mathis was fouled and converted both ends of the one-and-one attempts at the free-throw line with 1:26 remaining. Jahmil Barber had a pair of big blocks to slow down the Jaguars on the other end before Hargrove got a layup on an inbounds play to trim the lead once again to five (53-48) with 1:07 left.

Brooks would hit four free throws in the final 1:01 of the game and Mathis added a 1-2 effort at the line as the Wolverines closed out the win.

Mathis finished with 13 points and Jahmil Barber had an 11-point, 11-rebound double-double to lead the Wolverines. Shawn McKenzie hit for 18 points and Hargrove finished with 11, all in the second half for the Jaguars (3-8, 2-1). 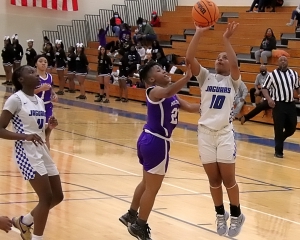 GIRLS
Stephenson 56, Miller Grove 40
The Stephenson Lady Jaguars answered a 9-0 run in the second quarter with a 9-0 run of their own to take control in a 56-40 Region 6-4A girls’ win over the Miller Grove Lady Wolverines.

Trailing 17-7 27 seconds into the second quarter, the Wolverines (1-12, 0-4) put together its 9-0 run to pull within 17-16 with 4:33 left in the first half. Jaylen Clark had a pair of baskets to go with a three by Antoinette Mountain and a layup by Trinity Coleman to cut into the Stephenson lead.

Stephenson answered in the final 4:12 of the half with its 9-0 run to pull away to a 26-16 lead at the break. Taj Hunter hit three of four free throws in the run, including two with under a second to play in the half for the 10-point lead.

An 11-2 start to the second half had the Jaguars (7-6, 2-1) up 37-18 with 3:59 left in the third quarter. Five different players scored for the Jaguars in the run as Blezzy Abong got it started with a layup and Kelli Finkley finished it off with a layup on an assist by Hunter.

Stephenson put together another 11-2 run during a fourth-quarter run keyed by seven points from Finkley. Brianna Spruill who started the stretch by the Jaguars finished it with 3:49 left in the game with a baseline jumper to put Stephenson up 54-29.

Coleman and Moet Felton had back-to-back three-point plays as the Wolverines began a 10-0 run in the final three minutes. It was not a enough as Stephenson finished off the 56-40 victory with a pair of Abong free throws with four seconds to play.

Taj Hunter led the way for Stephenson with 16 points and 7 rebounds while Kelli Finkley finished with 14 points and 6 rebounds to go with 10 points by Blezzy Abong. Zoey McMickens added 9 rebounds.