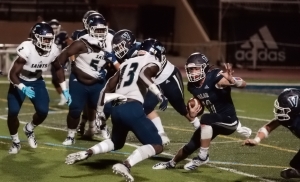 Trailing 17-7 in the fourth quarter, the Cedar Grove Saints scored 20 points on the way to a 27-17 win over the 2018 Colorado Class 5A state champion Valor Christian in Highland Ranch, Colorado on Friday night.

Senior defensive back Latreivin Blackamore came up with the big play defensively late in the third quarter with an interception return to the Valor Christian 49-yard line.

The Saints offense took over at that point and drove down for Austin Smith’s second touchdown run of the night on a one-yard run. Louis Dominguez hit the point after to pull the Saints within 17-14.

Smith would account for his third touchdown of the night as he connected with Janiran Bonner on a 53-yard pass play and with Dominguez connecting on his third PAT of the night the Saints were up 21-17.

Valor Christian showed it was a champion putting together a late drive down to the Cedar Grove seven-yard line with 30 seconds remaining in the game.

The defending Georgia Class 3A state champs defensive then sealed the victory as senior defensive back Tee Denson jumped a pass at the goal line and raced 100 yards for a touchdown to clinch the win with 15 seconds to play.

Valor Christian jumped out to a 14-0 lead early in the second quarter before the Saints answered on Smith’s first one-yard touchdown run of the game. A 34-yard field goal by Valor Christian pushed the lead out to 17-7 at the half.

Cedar Grove improved to 2-1 on the season with the rebound win after last week’s last-minute loss to Central of Phenix, Alabama. Valor Christian suffered its first loss in 15 games.

Dunwoody 37, Chamblee 0
Quarterback Davis Ledoyen threw for four touchdowns to lead the Dunwoody Wildcats to their sixth consecutive victory in the Battle for the Golden Spike at North DeKalb Stadium on Friday night.

Jaxon Warshaw added a touchdown pass for Dunwoody in the game.

The Wildcat defense held Chamblee to minus-six yards rushing in the game and just 115 overall behind the play of Isaac Anderson (12 tackles, 1 for a loss) and interceptions by Cash Goolsby, Cevon Mitchell and Grant Jones.

Haynes scored on an 18-yard run and threw touchdown pass of 17 yards and 55 yards to Jeremy Cain and Dequan’dre Moore as the the Lions rolled out to a 28-0 lead.

The Lions are 2-0 to start the season since 2013 when they defeated Ely (FL) and Southwest DeKalb on the way to their last playoff season.

Arabia Mountain fell to 0-3 on the season.

Redan 44, McNair 0
Jaquez Williams scored four touchdowns to lead the Redan Raiders to a 44-0 win over the McNair Mustangs at Avondale Stadium on Friday night.