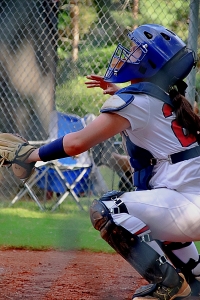 Dunwoody catcher Danielle Fiscella reacts to a foul ball during Dunwoody’s Region 7-7A match up with Pope. (Photo by Mark Brock)

Two teams battling for a home playoff berth met at Dunwoody on Thursday with Pope taking a 13-0 win over the Dunwoody Wildcats.

Pope pitcher Hallie Adams gave herself a jumpstart with a two-run homer to right field following a leadoff, bunt single by Jadyn Lanciux. Zoe Lanciux followed with a solo shot to center and back to back doubles by Carolyn Deady and Bailey Chapin helped build the 5-0 advantage.

Adams set Dunwoody down in order in the first and the Greyhounds picked up two more runs in the second on a RBI double by Zoe Lanciux and a sacrifice fly by Deady turned into a double play on a good throw from Dunwoody left fielder Leland Eith to third baseman Gracie Puckett that limited the damage in the inning.

Dunwoody got a runner on in the second as Zuri Watts was hit by a pitch, but was left stranded.

Puckett came up big in the field for Dunwoody in the top of the third with a nice grab of a hard hit ball to third and a throw home to catcher Danielle Fiscella to cut down the runner at the plate. She snagged another hard hit ball off the bat of Adams and tagged the runner going to third as Dunwoody got out of the inning with no runs scored.

Fiscella walked with one out and Puckett broke up Adams’ no-hit bid with an infield single to have Dunwoody threatening trailing 7-0 in the bottom of the third. Molly Kotzin stepped to the plate next and hit a hard line drive that the Pope right fielder was able to hold on to for the final out to end the threat.

Deady led off the fourth with a home run to center field where Dunwoody center fielder Jaida McCord made a leaping attempt at the fence that came up just short. After giving up a single to the next batter Dunwoody pitcher Kayla Chiang got a strikeout and two groundouts to keep the score at 8-0.

Adams struck out the last six batters she faced to close out the game after Pope added five more runs in the top of the fifth.

Dunwoody’s Gracie Puckett ended the game with the only hit against Adams who struck out 11.