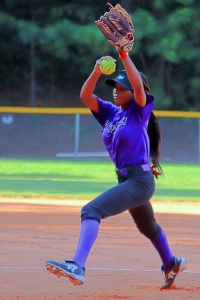 Miller Grove’s Latiya Lee pitched a no-hitter and struck out 10 in four innings in a 14-2 season opening win over the Tucker Tigers. (Photo by Mark Brock)

Miller Grove’s Latiya Lee threw four no-hit innings and struck out to help propel the Miller Grove Lady Wolverines to a 14-2 win over the Tucker Lady Tigers in the two teams’ season opener at Tucker on Tuesday.

Lee aided her own cause in the first inning with an RBI single and stole home in a double steal as Miller Grove got out to a 3-0 lead.

Lee then struck out the side in the bottom half of the first and the next two in the bottom of the second on the way to an unblemished first two innings on the mound.

Chyna Simmons and Jalina Roberson each drove in one run in a three-run third to extend the Wolverines’ lead to 6-0 heading into the bottom of the third.

Lee got herself into some trouble in the third by walking Tucker’s Arysss McDuffy and Kayleah Owens to start the inning. McDuffy got Tucker on the scoreboard two wild pitches later to make it a 6-1 game.

Miller Grove would put the game away scoring seven of eight runs in the fourth inning with two out in the inning led by Dominique Coney. 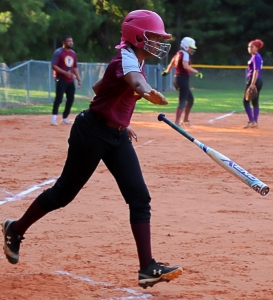 Tucker’s Mattie Jenkins drew a bases-loaded walk to drive in one of the Tigers’ two runs. (Photo by Mark Brock)

Coney led off the inning with a double and scored on an error to get things going for Miller Grove. Tamara Burnice had an infield single to score one run and Simmons and Smith pushed runs across with a hit by the pitch and walk, respectively, with the bases loaded to bring Coney back to the plate.

A line shot into the left-center field gap off the bat of Coney went to the fence as she cleared the bases and came around to score as the relay was late on the inside-the-park grand slam.

Mattie Jenkins drew a bases-loaded walk to push a run across for the Tigers (0-1). Lee finished the game with her ninth and tenth strikeout to take home the season opening win.

Coney finished the game 2-3 at the plate with a homerun, double, three runs and 4 RBI to lead the Miller Grove offense.