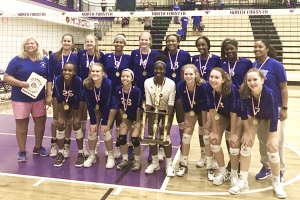 Pool play comes back to the sixth annual DeKalb County Spikefest Volleyball Tournament this season to determine qualifiers for the championship to be played Friday (August 9) and Saturday (August 10).

The 2018 tournament was won by Chamblee as the Lorri Reynolds Lady Bulldogs defeated Decatur in the championship round of the 20 team bracket. Dunwoody captured third with a win over Lakeside. It was Chamblee’s second title (2014, 2018) and avenged a loss to Decatur in 2017. Dunwoody won the titles in 2015 and 2016.

Coaches voted to go with pool play again this year to give teams more matches under their belts before regular season and Area action really gets underway. Each team is guaranteed four matches in the Spikefest.

Five pools are set up with the top two teams from each pool advancing to the Gold Championship bracket and the third and fourth place teams taking part in the Silver bracket.

Redan hosts Pools 3 and 4 also beginning at 5:00 pm on Friday and continuing at 10:00 and 11:00 am on Saturday. Pool 3 consists of Arabia Mountain, McNair, Redan and Stephenson and Pool 4 includes Dunwoody, Miller Grove, Stone Mountain and Tucker.

Pool 5 play takes place at Clarkston beginning at 5:00 pm on Friday and continuing at 10:00 and 11:00 am on Saturday. Pool 5 teams are Cedar Grove, Clarkston, Decatur and Martin Luther King Jr.

See links below for schedule/brackets: