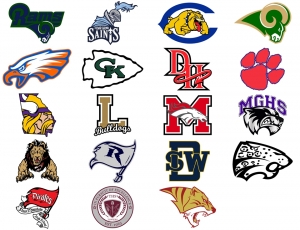 Get a first look at DCSD football as teams kickoff the fall with their preseason scrimmages.

The Redan Raiders kickoff the 2019 DCSD high school football preseason with a trip to Osborne tonight (Thursday, Aug. 8) at 6:30 as the first of five scrimmages involving DeKalb teams this week.

The game will be the debut of new Raider head coach Rahman Sparks.

Six other DeKalb teams get their first taste again an opponent other than themselves on Friday night with four playing in the county.

Clarkston hosts Lakeside in a 6:00 pm contest at Hallford Stadium to get the night started on Friday. New Lakeside head coach Morris Starr gets his first live action leading the Vikings.

McNair alum Johnny Burdette gets to lead his alma mater into action at 7:00 pm at Fellowship Christian. Burdette was a member of the 1991 Mustang playoff team.

Defending Region 5-5A champion Southwest DeKalb travels to Salem for a 7:00 pm contest.

Nine more scrimmages are set for next week (Thursday, Aug. 15-17) including a pair of long road trips. Columbia travels to Tampa, FL to play Tamps Catholic at 7:30 pm on Friday.

Chamblee and Towers hook up on Thursday (Aug. 15) in a 6:30 pm game at North DeKalb Stadium. The Bulldogs will debut under new head coach Scott Schwarzer against Towers second year coach Vonnell Carter who got a full year of work in with the Titans.

The rest of the games are set for Friday, August 16 with two being played in DeKalb. Stephenson and Arabia Mountain face off at Hallford Stadium at 7:00 pm in an all-DeKalb matchup. Dunwoody is set to host Wesleyan in a 7:30 pm game at the Wildcats’ campus field.

Marcus Jelks returns to lead the Lithonia Bulldogs after a two-year hiatus and takes his squad to Berkmar for a 7:00 pm game. Coach Deante Lamar takes his Martin Luther King Jr. Lions to Newton County for a 7:30 pm kickoff.

Coach Lee Hannah starts his second year at the helm at Miller Grove giving his Wolverines a taste of football outside DeKalb County with a trip to Winder-Barrow at 7:30 pm.

Bryan Lamar begins his eighth season leading the Tucker Tigers with a trip to take on Marietta on Friday at 7:30 pm.

The DCSD Middle School Football teams get a taste of game action with jamboree play on Saturday, Aug. 17 beginning at 10:00 am at Adams (3 games), Avondale (2 games), Godfrey (2 games) and Hallford (3 games) Stadiums.

Miller Grove and Redan are scheduled to meet in the first regular season game in DeKalb on Thursday, Aug. 22 at Hallford Stadium at 7:30 pm.