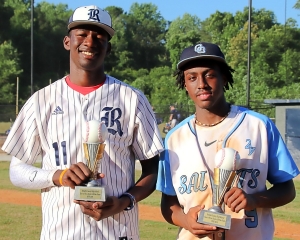 The West Junior All-Star team extended its lead in the series to 5-2 since 2013 with a 15-5 victory over the East in the 11th annual DCSD Junior All-Star Baseball Classic at Redan’s Greg Goodwin Field on Tuesday.

Trailing 4-2 heading into the top of the fifth inning, the West squad took advantage of two East errors to put eight runs on the board and never looked back on the way to the win.

West Most Valuable Player Kolby Taylor of Cedar Grove picked up two of his three RBI in the game with a one-out single to center to drive in Decatur’s Eddie Galatos (RBI single) and Lakeside’s Deatric Alexander (bases-loaded walk RBI) to make it a 9-4 game.

Dunwoody’s Tyler Eith and McNair’s William Harris both picked up RBIs in the big inning for the West.

Taylor’s RBI single in the seventh keyed a three-run seventh for the West as the lead ballooned to 13-4. Eith had a sacrifice fly to score Decatur’s Jackson Hills and Cedar Grove’s D’Corrie Kimble’s groundout plated Chamblee’s Michael Sarzen in the top of the eight to make it a 15-4 lead.

Arabia Mountain’s Desmore Joseph drove in the East’s final run of the game in the bottom of the eighth with an RBI single that scored his Arabia Mountain teammate Eric Matthews. 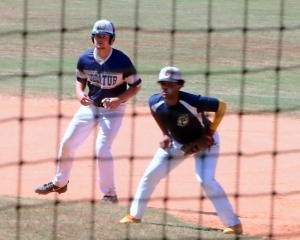 The West took the lead in the top of the third with a pair of runs driving by Harris on a fielder’s choice that scored Eith and Alexander’s RBI double to push Harris across for the 2-0 advantage.

Evan’s smacked a double to deep left-center field to score Lithonia’s Theodore Reddick to put the East on the board and trim the lead to 2-1 in the bottom of the third.

The East took a short-lived 4-2 advantage with three runs in the bottom of the fourth. Tucker’s Lennox Moody grounded out to first to score Martin Luther King’s Lamont Barner who reached on a walk and Lamback singled to score Stephenson’s Alote Jones who had walked earlier in the inning.

Taylor finished the day 2-4 at the plate with three RBI and pitched a perfect fifth and sixth innings on the mound to earn the West MVP honors. Taylor struck out two while setting down six consecutive East batters. He joins Cedar Grove alum Rashad Preston as the second Saint to earn top honors in the game.

Evans finished the day with six strikeouts in his two inning start to the game and 1-2 at the plate with a double and RBI for the East MVP. He is the third Redan Raider to receive the honor given since 2011.

Theodore Reddick of Lithonia finished the day 2-3 with a run scored while catching for the East. King’s Lamont Barner took the loss in 2/3 of an inning on the mound.

See link below for the 2019 All-Star Baseball Classic Boxscores: