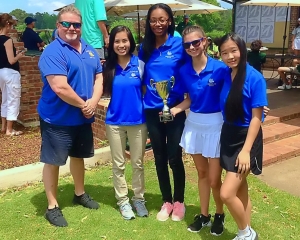 The Chamblee Lady Bulldogs claimed a Top 10 finish at the 2019 Class 5A Girls State Tournament.

A Top 10 finish in the Class 5A Girls’ State Tournament was secured on Tuesday for Coach Kurt Koeplin’s Chamblee Lady Bulldogs as senior Tiffany Li cut 12 strokes off her first round score to lead the team to a two-day total of 631 at Sunset Mills Golf Course in Carrollton.

Li, a senior who played in the 2017 and 2016 state tournaments, struggled to a first round 109 on the first day at the tournament, but bounced back with a 97 to trim the 12 strokes off and finish with a 206. The improved second round pulled her into a tie with younger sister and freshman Olivia Li for 29th. Olivia had been the leader for Chamblee on the first day with a 98, but finished the second round with a 108.

Kristen Nwadike finished the first day tied for 30th overall with her 105 fell into a tie for 41st after shooting 114 to complete a 219 total for the two days. Sarah Pruitt Messick finished 49th with a 144-142—286 finishing up two strokes better in the second round of play.

It was Chamblee’s second state tournament appearance in three seasons. The Lady Bulldogs finished 15th overall in 2017 with a combined score of 682 and finished 51 strokes better this season. Chamblee qualified as the fifth team out of the area in 2017 with a team total of 322. This year’s squad finished second in the Area 3-5A standings shooting five strokes (317) better than in 2017.

Arabia Mountain’s Miracle Goolsby, who qualified as an individual for the state tournament, picked up a Top 25 finish as her score of 99-103—202 tied her for 25th.

Torrance Allen of Arabia Mountain was the only boys’ participant in the state tournament this year as he finished tied for 43rd out of 82 golfers with an 80-85—165 at Sunset Mills.

Lakeside’s Kaylee Cornelius qualified for the Class 7A girls’ state tournament at Chimney Oaks Golf Course in Homer. Cornelius finished in a tie for 40th with her score of 93-95—188.

See link below for all 2019 State Tournament Results