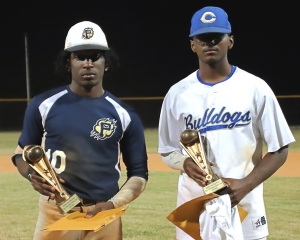 The East All-Star’s pitching staff combined for 18 strikeouts and allowed just three hits on the way to a 5-2 win over the West All-Stars in the 17th annual DCSD Senior All-Star Baseball Classic on Tuesday night at Redan’s Greg Goodwin Field.

Stephenson senior Ga’Von Wray had five of the K’s on the mound for the East as he struck out five of the first eight batters without allowing a hit or run in the first two innings. The win closed the West’s series lead to 4-3 since going to the East/West format in 2013.

Wray would get the win after taking the loss in the Junior game last year in which the East walked 15 batters as his teammates put three runs up in the bottom of the first and never trailed in the game.

Webb would score the third run of the inning on a throwing error by the West defense for the early 3-0 lead.

The score remained 3-0 until the top of the fourth inning when Chamblee’s Davis Jenkins singled into center field to score fellow Chamblee teammate Matthew Welsh, who reached on an error to lead off the inning, to make it a 3-1 game. Bryant would end the threat by stranding Jenkins at third with his third and fourth strikeouts in two innings of work. 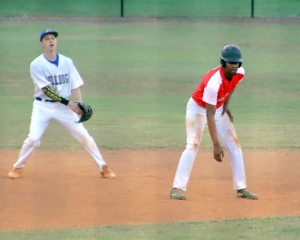 The East answered with another run of it’s on in the bottom half of the fourth when Stone Mountain’s Jacorrie Knolton walked and later scored on a wild pitch to push the lead back out to three at 4-1.

Chamblee’s Travis Hammond delivered a two-out, RBI single in the top of the fifth to trim the lead to 4-2. His hit scored McNair’s Michael Stowers who had walked and stole second to lead off the inning. Justin Jordan ended the threat via his third strikeout of the inning to strand Hammond at second.

The West was held scoreless the rest of the way as the East pitching staff compiled six more strikeouts in the final four innings of work. 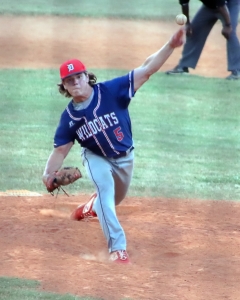 Dunwoody’s Will Forth pitched two innings for the West.

Kilpatrick tripled to left-center in the bottom of the eighth and scored on a wild pitch to give the East an insurance run and final of 5-2.

Stephenson’s Talib McDaniel-Burdeaux walked one batter in the ninth, but also had a pair of strikeouts in not allowing a run to pick up the save for the East.

Southwest DeKalb’s Juston Jordan was 2-2 at the plate with a RBI, two stolen bases and pitched two innings with five strikeouts to earn the East Most Valuable Player Award.

Arabia Mountain’s Tyson Scott itched two innings of relief and added a pair of strikeouts and allowed just one hit and one walk for the East.

Hammond finished the day 1-1 at the plate with a RBI and two walks to be named the West MVP. No West batter had more than one hit in the game. Decatur’s Tucker Jones contributed a double as he went 1-2 in the game.

See link below for the 2019 All-Star Baseball Classics boxscores: