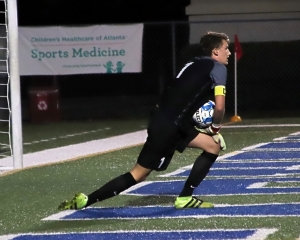 Lakeside’s Andrew Seybolt with one of his eight saves against Lambert. (Photo by Mark Brock)

Two bad bounces proved to be difference makers as the No. 3 ranked Lakeside Vikings dropped a hard-fought 2-1 decision to the No. 1 ranked Lambert Longhorns in the Class 7A boys’ soccer championship on Saturday night at McEachern High School.

It was the Vikings first trip to the state finals since the Coach Rick Barbe led Vikings won a penalty kicks decision over Southeast Whitfield in 2008 and the game looked like it could be heading to overtime tied 1-1 with under two minutes to play.

As the clock ticked below two minutes Lambert got the second of their two big bounces for the game winner. Lakeside goalie Andrew Seybolt, who had played an outstanding game in net, dove at a Lambert shot which hit the goal post and bounced quickly out front to a waiting Yeonsung Lee.

The Longhorn gathered in the ball and got off a kick that got past Seybolt as he was regaining his feet to put Lambert up 2-1 with 1:46 remaining.

Lakeside got one more good shot on goal only to have Lambert’s Chris Smith make his 11th save of the night to hold the 2-1 lead. Lambert was able to keep the ball out enough to run out the final 1:10 of the game.

The Vikings were the more aggressive team in the first half as they kept control of the ball and put the pressure on the Lambert defense and goalie Chris Smith who collected six saves in the first half. 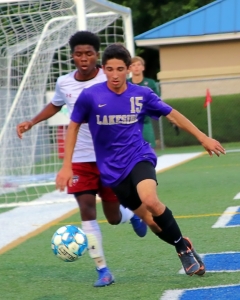 Lambert (21-1-1) got a pair of opportunities in the final 3:25 of the first half, but Seybolt was up to the challenge keeping the game scoreless. The Vikings got off a shot with 21 seconds left only to have Smith make the save to keep the game tied at 0-0 heading into halftime.

Lambert came out more aggressive in the second half and during a 13-minute span had five solid shots on goal against the Vikings and Seybolt as the game continued to be a clinic in defense by both teams in goal and out. 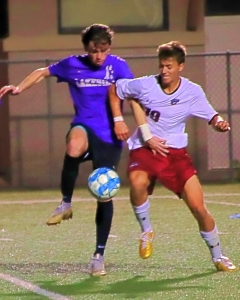 Tyler Nadiak took advantage of the first break for the Longhorns against Seybolt with 9:01 left in the game. Seybolt turned away a shot only to have it bounce out front to Nadiak who responded with a quick kick for the score as Seybolt was getting up and looking for the ball.

Lakeside trailing 1-0 turned up the pressure again on Lambert and broke into the scoring column as a nice backwards pass from Matthew Franklin to Jared Spetseris set up the tying goal of the foot of Spetseris with 7:17 to play. It was Spetseris’ team leading 14th goal of the season.

The Vikings (18-2-3) had two more good opportunities turned away by Smith one of which he was able to grab the ball as it bounced away with Lakeside waiting to pounce on the loose ball.

Seybolt, who had 11 shutouts this season, collected eight saves along the way. Lakeside’s 18 wins on the season was the second highest win total in program history trailing just the 2008 championship team’s 20-1-1 record and the 20-1-0 mark set in 2016.