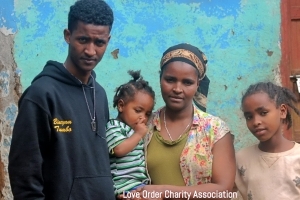 Former Clarkston cross country runner Bineyam Tumbo (far left) is finding ways to give back to his native Ethiopia while finished college. One way is serving the Love Order Charity Association and orphanages in Ethiopia.

Growing up in Clarkston with his parents back in his native Ethiopia former Clarkston High cross country runner and soccer player Bineyam Tumbo remembers playing in the streets with orphans and other parentless kids as the time he decided he was going to find a way to help orphans and kids like himself when he got older.

As a sophomore business major and cross country runner at Division III Earlham College in Richmond, Indiana he is beginning to make that dream come true.

“I grew up with my Mom and Dad working three jobs in Ethiopia to send us to Atlanta with an opportunity to succeed,” said Tumbo. “They weren’t around as I was growing up and I played in the streets with other kids whose parents were not around or they were orphaned. I knew then I would find a way to help kids in these kind of situations.”

As a freshman he self-designed an internship to Ethiopia to work with the Love Order Charity Organization to work with orphanage in Hosaena, Ethiopia. His school paid for him to travel back to his native land for three months to help the orphans as he had promised himself years earlier.

He came up with and created an organization called Shoes Save which collects and distributes used shoes (good condition) to orphans in Ethiopia. He is working on a trip in July to transport some of the best pairs of shoes out of some 600 collected to distribute. 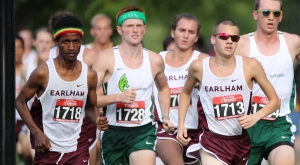 Currently, Tumbo is serving an internship with Boys’ and Girls’ Club of Richmond helping to design a soccer program for kids from kindergarten to sixth grade. It got underway earlier this week with 27 kids from kindergarten to second grade in one group and 14 in grades three to six participating. The program will run through June 28 with his trip to Ethiopia set for July 15.

Two weeks ago he and a group of students were awarded a $20,000 grant to begin their business model for a waste management business.

As he studies Business Management with an emphasis on marketing and a minor in Sports Management, he is also in the process of getting a real estate investment business started. All this while running cross country where he has finished as high as fifth and earned Heartland Collegiate Athletic Conference Honorable Mention both seasons.

“God willing, I hope to be running multiple businesses while helping create jobs and helping the economy,” Tumbo continued.

Two of the big influences on him growing up were his older brother, Leiso (cross country/soccer), and his cross country coach Wesley Etienne at Clarkston.

“Leiso and I both played soccer and in the fall he convinced me to go out for cross country,” Tumbo stated. “Leiso was a senior and he was my ride home. So it was either ride the bus home and do nothing until soccer in the spring or spend time with him and learn cross country.”

He began to develop a great relationship with his coach, Etienne, and it was the beginning of a great run for the Clarkston program.

“I remember Leiso telling me about his brother and going to watch him run track for Freedom Middle School in the spring of 2013,” said Etienne. “He came in and was a captain for three years. He was very goal oriented and that drive was what helped us to win state.” 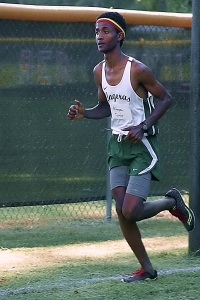 Bineyam Tumbo runs in a DeKalb County school meet as a senior. (Photo by Mark Brock)

That 2013 team won the DeKalb County championship, the Region 6-5A title and finished runner-up in the Class 5A State Meet. His last three years at Clarkston the team won two more county titles, three more region titles and three consecutive Class 5A state championships (2014-2016). Tumbo served as a team captain during the run and had a highest finish of seventh at state in 2016.

“Coach was always straight up with us about everything,” said Tumbo. “He showed us the importance of hard work and education. He would remind us of what our parents sacrificed to get us to Atlanta and how important it was for us to succeed.”

Etienne continues to serve as a father figure, mentor and coach to his former runners.

“Everyone at Clarkston High School and the community loves Bineyam,” said Etienne. “I remember his first trip back to Ethiopia the summer before he graduated where he saw the needs of his home and it fueled him to do the things he is working on now. I’m proud of what he has accomplished and what he is doing. He learned that you will have failures in life. He learns from them and gets right back at it. He was admitted to around 62 colleges and we had to tell him he could stop applying.”

Their relationship has continued to grow and both have grown to love and respect what each of them do.

“When I get back down there I always go check on him,” said Tumbo. “He made us part of his family and community. Other guys continue to go back and spend time with him. He continues to be someone who mentors us and is there for us just like he was in high school.”

Next in line is a school for those kids in Hosaena so they can get a step up in education.

“It is going to be school to serve street kids and orphans to be included in the schooling system,” said Tumbo. “It is going to be a private school but the kids will have scholarships to pay for their education.”

For a kid who came to Atlanta in 2009 as an 11-year old without his parents he has found a way to succeed and give back to those in need.

“I’m not sure what the future holds for me, but I will continue working hard and see where it leads,” said Tumbo.