Bulldogs Give Chamblee Sweep of Class 5A Tennis Titles 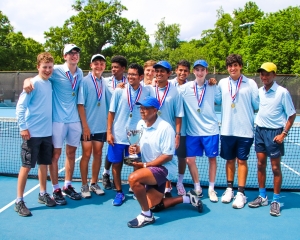 DeKalb Schools tennis history was made on Tuesday as the Chamblee Bulldogs knocked off Grady 3-0 in the Class 5A state championship to give Chamblee a sweep of the boys’ and girls’ state titles for the first time in program and DeKalb history.

The history making moment was set up on Saturday when the Lady Bulldogs won their third consecutive state title with a 3-0 win over Kell at the Rome Tennis Center at Berry College before the rain and lightning caused the postponement of the boys’ title match until Tuesday’s date at Piedmont Park.

The Bulldogs got the first point of the match behind freshman Andrew Pietkiewicz’s 6-2, 6-1 victory over Grady senior Josh Wolfe, a Lafayette tennis signee, at No. 1 singles. Pietkiewicz (11-4) broke Wolfe’s serve twice in the last three games of the match to seal the opening point.

Grady won first sets at No. 2 singles (Maximus Freightman over senior Eshaan Agrawal in a 7-6 tiebreaker) and No. 2 doubles (Henry Edneaoles/Colin Stanley over Chase Starks/Nevin Aresh, 6-3). 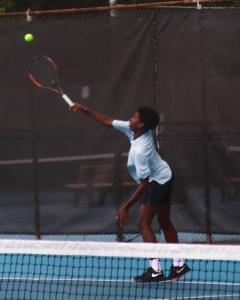 But the Bulldogs had first set wins at No. 3 singles as sophomore Hap Howell was up 6-2 over Grady’s Jack Stegelman and at No. 1 doubles with senior Carter DiFonzo and freshman Bryce Starks won their opening set 6-2 over Grady’s Tedddy Suazo and Scott Whitley.

Howell (10-8) pulled the Bulldogs within one point of the state title as he closed out Stegelman 6-3 in the second set to make it 2-0 in favor of Chamblee with three matches still on the court.

DiFonzo and Starks (10-1) would see to it that this one ended on a much brighter note as they closed in on a second set victory. Leading 5-1, Starks was up to serve with the state title within the Bulldogs’ grasp. The pair pulled out the game against Suazo and Whitley bringing their teammates and fans running onto the court in celebration with the 6-2, 6-1 victory for the state championship trophy.

The state championship ended a 21-year drought in bringing the Bulldogs their second state title. The first came in 1998 with a 3-1 win over Westminster in a perfect 17-0 season.

Chamblee set a new school record with 19 wins (5 losses) this season three years after winning just five matches (2016). Coach Larisa Tulchinsky’s teams won 13 in 2017 and 15 in 2018 as the Bulldogs built toward this year’s state title run.