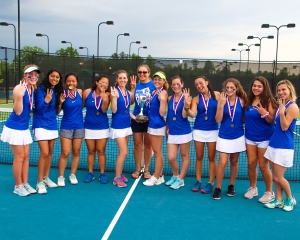 Three-peat!! Chamblee Lady Bulldogs tennis team made it three in a row at the Class 5A girls’ tennis champoinships with a 3-0 win over Kell at the Rome Tennis Center at Berry College on Saturday. (Photo by Mark Brock)

Chamblee made it three consecutive Class 5A girls’ state high school tennis championships cruising past the Kell Longhorns 3-0 on the courts at the Rome Tennis Center at Berry College on Saturday morning.

Due to expected thunderstorms in the Rome area, the anticipated rematch of last year’s 3-2 thriller that included a four-plus hours battle at No. 2 singles between Chamblee’s Grace Pietkiewicz and Emily Dearing that decided last year’s title, was started early.

Chamblee jumped out in front quickly winning all five first sets in each of the five matches led by sophomore Lila David who won her first set with Kell’s Samantha Norman by a score of 6-2 to get the Lady Bulldogs rolling.

First set wins soon followed at No. 1 and No. 2 doubles. Chamblee’s sophomore Samantha McCrery and freshman Allison Lvovich won their No. 2 doubles first set against Abby Johnson and Sam Goss 6-3 followed by a 6-4 win at No. 1 doubles by junior Madison Trinh and senior Madeline Meer over Kell’s Alex Rapplean and Paulina Katsoudas.

Chamblee’s No. 1 singles player sophomore Neena Katauskas lost an early lead in her first set against Kell’s Nicole Abel to fall even at 6-6. She then battled her way to a tiebreaker win to put another Lady Bulldogs’ set in the books. 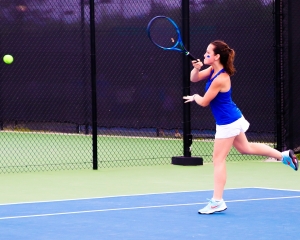 Sophomore Lila David gave Chamblee an early 1-0 lead against Kell with her win at No. 3 singles. (Photo by Mark Brock)

Pietkiewicz, a senior, and Dearing were matched for the second consecutive year at No. 2 singles. A long first set battle with a lot of points traded was the last to finish with Pietkiewicz taking a much harder than it looked 6-1 win.

David put the Lady Bulldogs on the board first as she cruised to a 6-0 win in the second set at No. 3 singles to win 2-0 over Norman and put Chamblee two wins from a third consecutive state championship. David’s eighth (8-5) win was a big boost towards the state title.

Soon after David’s win three Chamblee matches were one game away from finishing. McCrery and Lvovich were the first to close out their match winning the second set 6-3 for a 6-3, 6-3 win over Johnson and Goss to make it a 2-0 Chamblee advantage with two more matches on the verge. The pair finished 7-0 on the season.

The clincher came at No. 1 doubles as Meer and Trinh finishing up a 6-2 victory in the second set for the 6-4, 6-3 victory over Rapplean and Katsoudas to begin the celebration of the first girls’ three-peat in DeKalb County tennis history. The Chamblee duo finished the year 9-2. 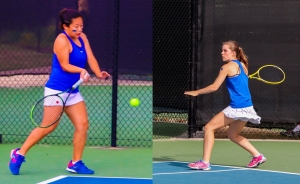 Chamblee’s Madison Trinh (left) and Madeline Meer teamed up to clinch Chamblee’s third consecutive state title with a win a No. 1 doubles. (Photos by Mark Brock)

The Lady Bulldogs finish the year 23-1 with 10 consecutive wins after suffering their first loss in three seasons. The loss broke a 60-match win streak and Chamblee is now 70-1 overall during their three-peat run.

Rain and thunderstorms caused the postponement of the Chamblee Bulldogs state title match with Grady which was to start after the girls finished. The two teams will play on Tuesday, May 7 at 2:00 pm at Grady High School.