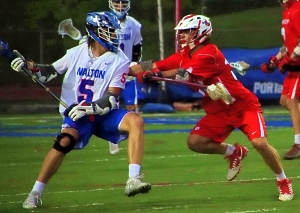 Lee Butler was the main culprit for Walton in the opening period with four goals, including two in less than a minute’s time, to put the Raiders up 2-0 with 7:28 left in the first quarter.

Goals by Drew Criss and Maddox Kaufman finished off a 4-0 run in less than three minutes to make it 4-0 with 5:25 to play in the first period.

Following a Dunwoody timeout Butler would score two more quick goals to push the lead out to 6-0 with 2:32 to play in the first. Walton put two more scores on the board in the final 1:06, including Criss’ second with 11.4 seconds left to make it 8-0.

Trailing 9-0 with under nine minutes left in the second quarter, Dunwoody got on the board as Conner Reid put one in the net to cut the margin to 9-1 with 8:33 to play in the first half.

Rex Hellman and Kaufman would each score a goal to send Walton into the break leading 11-1.

An end of the half penalty on Dunwoody gave Walton an early scoring opportunity to start the second half and the Raiders capitalized on a goal by Tate Herron just eight seconds into the half.

Dunwoody senior Sam Mahle scored the first of his two goals with 9:42 left in the third quarter to make it 12-2 in favor of the Raiders.

Butler would pick up his fifth goal of the game with 5:40 to play in the third period to give Walton a 13-2 lead heading into the final quarter of play.

Walton scored again with 8:35 to play to make it 14-2 before Mahle answered with his second goal of the game for Dunwoody’s third and final score.

Dunwoody finished the season 13-5 and with the program’s and DeKalb County’s first playoff victory in lacrosse 8-4 over Harrison in the first round. It was also the Wildcats’ third consecutive playoff appearance.