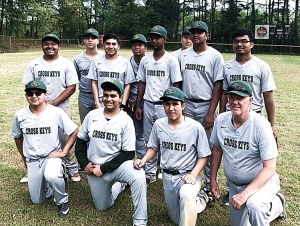 The Cross Keys Indians ended their losing skid at 87 with a thrilling 13-11 win over the Riverdale Raiders last Saturday.

Coach Mark Adams and the Indians bounced back from a 22-0 loss in the first game of a doubleheader to Riverdale to outlast the visiting Raiders and pull out a 13-11 triumph in the nightcap. The victory ended a losing streak of 87 games.

The two teams battled in a see-saw affair and were tied 10-10 after six innings when the Indians struck for three runs in the top of the seventh to take a 13-10 lead.

Cross Keys benefitted from a couple of walks and errors with a key RBI hit by Alomgir Hussain to take the three-run lead into the bottom of the inning as Riverdale was awarded the advantage of being the home team for the second game at Cross Keys.

Cross Keys starting pitcher Jose Parra went six innings and had to exit the game due to the pitch count after battling the Raiders offense in a 10-10 tie.

Hussain inherited the three-run lead and after an inside-the-park home run by Riverdale to trim the lead to 13-11, the Raiders put runners on base with a walk and an error with still no outs in the inning. The runners moved up to second and third and Hussain stepped up with a pair of strikeouts to get the Indians within one out of securing that elusive baseball victory.

“Alomgir came up big with those strikeouts in a very tight spot,” said Head Coach Mark Adams, who goes out on a winning note as he retires at the end of the school year.

Riverdale’s best hitter came to the plate next after already hitting two balls over the Indian’s outfielders in left and right to score runs. He promptly hit a hard liner into center field where the Indians’ outfielder Issidor Santillano turned his back to the infield and sprinted towards the fence.

In a move that brought Willie Mays iconic over-the-shoulder-catch to the mind of his coach, Santillano reached up over his shoulder for the ball. Seconds later he raised his hands with the ball in his glove.

“We could not see whether he caught it or it was rolling to the fence since his body blocked our view,” Adams said. “Then he raised his hands with the ball in his glove and the kids erupted to celebrate something that had not happened in over 4 years.”

“So many times they have been beaten hard or just could not hold on in the last inning,” said Adams. “But to see these kids play so well in a pinch in such a pressure cooker for them and come out on top was a joy.”

Coach Marcus Salter and the McNair Mustangs inched closer to a region crown in 6-AA, defeating Best Academy (5-2) April 11 in league action and also blanking Cross Keys (17-0) April 8 in going 2-0 and improving to 10-9 overall and 7-3 in the league.

Senior Nate Yeager tossed a no-hitter for Lakeside in a 15-0 pounding of Meadowcreek April 11, striking out five over four innings.

See links below for Week 9 varsity scores and JV results and standings: