Chamblee Sweeps Past Johnson-Gainesville into Sweet 16

Chamblee junior Madison Trinh makes a return during the No. 1 doubles match win with Madeline Meer. (Photo by Mark Brock)

The Chamblee tennis teams advanced to the Class 5A Sweet 16 round with a pair of 5-0 sweeps of Johnson-Gainesville on Tuesday at Sugar Creek Tennis Center.

The two-time reigning Class 5A girls’ state champions Chamblee Lady Bulldogs improved to 19-1 with their 5-0 sweep of Johnson (5-6) losing just one game in the five matches.

Senior Grace Pietkiewicz upped her record to 16-1 on the season with her 6-0, 6-0 win over Morgan Langley to pick up the first point of the match for Chamblee.

The second point for Chamblee came from the No. 2 doubles team of sophomores Samantha McCrery and Allison Lvovich who improved to 3-0 as a team with a 6-0, 6-0 victory over Johnson’s Grace Vanhooser and Viviana Medina.

The No. 1 doubles team of junior Madison Trinh and senior Madeline Meer (5-2) clinched the match with another 6-0, 6-0 win in taking down the Johnson duo of Zoey Blankenship and Beth Odum.

Sophomore Neena Katauskas (9-1) finished with a 6-0, 6-0 win over Anna Cooper and sophomore Lila David rounded out the sweep with a 6-0, 6-1 victory against Haley Grimes.

Chamblee will host the Decatur in the Sweet 16 round of the playoffs with a date and time to be set.

The Bulldogs (15-5) gave Chamblee the sweep of the first-round matches with an identical 5-0 victory over Johnson (3-8) while also losing just one game on the way to the win.

Sophomore Hap Howell (8-8) logged the first point of the match for Chamblee with a 6-0, 6-0 score over Johnson’s Ethan Bruce at No. 3 singles.

Freshman Andrew Pietkiewicz (8-4) cruised to a 6-0, 6-0 shutout of Garrett McCarthy at No. 1 singles to put the Bulldogs within one win of advancing. 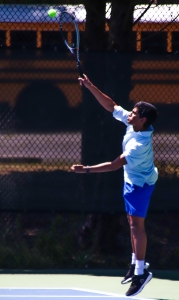 The match clinching point came from senior Eshaan Agrawal (5-2) at No. 2 singles as he knocked off Johnson’s Jackson Barkley 6-0, 6-0.

The No. 1 doubles team of Carter Difonzo and Bryce Starks upped their record to 6-1 via a 6-0, 6-0 sweep of Johnson’s AJ Buendia and Henry Hernandez to make it 4-0.

Nevin Aresh and Chase Starks (3-0) cruised to a 6-1, 6-0 win over Johnson’s Jamie Baeza and Miguel Guerrero at No. 2 doubles to close out the match. Chamblee faces North Springs in the Sweet 16 with day and time to be announced.

The Tigers did not fare as well falling 3-0 to Jones County to win up their season.

The Druid Hills Red Devils moved into the Sweet 16 for the first time in 16 years with a 3-2 thirller over Northside-Columbus. The 2003 Sweet 16 berth was also the last time Druid Hills won a first-round match. They will travel to West Laurens in the Sweet 16.

The Dunwoody Wildcats downed Creekview 3-0 in the opening round of Class 6A state playoffs and advance with a trip to Douglas County in the Sweet 16.