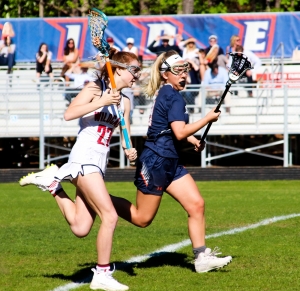 Dunwoody’s Sadie Cramer (27) moves up the field against a North Springs defender. (Photo by Mark Brock)

Senior night for the Dunwoody lacrosse teams was a big success as the Wildcats and Lady Wildcats cruised to victories over their opponents from North Springs.

The Lady Wildcats evened their record at 6-6 on the season as three seniors combined for nine of the team’s goals in a 20-6 victory to start the night at Wildcat Alley.

Senior Phoebe Ringers led the way with six goals including one in the first eight minutes of the game as Dunwoody jumped out to the early 4-0 lead. Junior Cate Pickering who would finish with five goals on the night had a pair in that early 4-0 start along with freshman Kayla Heinrich’s first of four goals in the game.

After North Springs scored its first goal at the 15:40 mark of the first half, Pickering answered with her third goal of night running straight at the goal to make it 5-1.

Ringers got a running start in front of the goal following a penalty on North Springs with 12:58 to play and 34 seconds later Kyla Chiang hit her first of two goals of the night to push the lead to 7-1.

North Springs answered with a goal only to have Chiang start a 7-0 run by the Lady Wildcats that included three goals each from Ringers and Heinrich to extend their advantage to 14-2 before North Springs got another goal.

Dunwoody took a 15-3 lead into the half and came out with two quick goals by Ringers and Pickering to make it 17-3.

The lead continued to move forward with goals by Heinrich and Pickering pushed Dunwoody further ahead at 19-4.

North Springs would sandwich a goal by senior Olivia Harbin with a pair of scores for the final of 20-6. 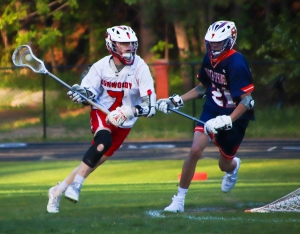 Dunwoody’s Zach Rosing (7) comes around the net looking for a scoring opportunity against North Springs. (Photo by Mark Brock)

Dunwoody dominated the boys’ game as well rolling to a 21-7 victory as 11 different Wildcats scored on the way to their 10th victory (10-4) of the season.

Senior Ben Sokolik got his senior night off to a fast start for Dunwoody scored a pair of goals within 25 seconds of each other for a 2-0 lead just 1:06 in to the game.

Jake Reuben helped North Springs answer with his goal to cut the lead to 2-1.

Junior Connor Brogdon was part of three of the next four Dunwoody goals with an assist to Noah Fox (3-1) and following a Conner Reid goal hit back to back scores as the lead ballooned to 7-1 with 2:31 to play in the first quarter following Zach Rosing’s goal.

Carlton Pulley picked up North Springs’ second goal of the match, but Anderson Nail and Fox found the net for goals to send the Wildcats into the second quarter with a commanding 9-2 lead.

Fox found Brogdon out front just seconds into the second quarter to make it 10-2. Carson Bregitser added a goal at the 8:15 mark and Brogdon got off a scoring shot while being pushed to the ground made it 12-2.

Reid and Sean Fox had back-to-back goals to increase the lead to 14-2 with 4:31 left in the opening half. Dunwoody took a 14-3 lead into the break as North Springs’ JD Kilburn scored with 3:47 to play before the half. 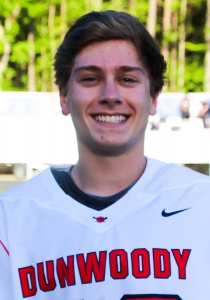 Twenty-six seconds into the second half Sean Fox flipped a pass to Bregister who tossed a behind the back shot into the net for a 15-3 lead.

Jack Bahr, Sam Mahle and Nail each contributed a goal in the final 3:45 of the third sending the Wildcats into the final quarter ahead 18-5.

Nail, Sam Mauldin and Josh Blank added fourth period goals for the Wildcats and JD Kilburn hit two for North Springs to make the final of 21-7.

Sean Fox became the Wildcats leading point man with two goals and two assists on the night for 205 for his career to set a new mark for Dunwoody. Fox hit the 200 mark the night before with one goal and one assist in a big win over Grayson the night before at Grayson.