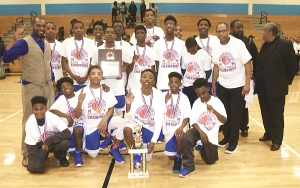 The Stephenson Jaguars defeated the Salem Lions 64-38 in the DCSD Middle School Basketball Championship at Cedar Grove Middle School to wrap up its second undefeated title in the past four seasons.

Stephenson (17-0) jumped out to an 18-6 lead after one quarter of play and never looked back on the way to the title victory. Six different Jaguars scored in the first quarter led by Championship MVP Tahj Evans with seven points (1 three-pointer) and Christian King four points.

Kevin Bruce and Joshua Brown accounted for all of Salem’s (15-2) points in the first period of play with a three-pointer each.

Stephenson came out on a roll in the third quarter exploding for 21 points led by Hendricks and Antonio Shy with six points each in the period. Baugh had eight of Salem’s 10 points in the quarter as the Jaguars went into the final quarter up 52-23.

Evans’ 15 points led four Jaguars in double figures followed by Antonio Shy with 11 and 10 each from Steven Moore and Eddie Hendricks.

Baugh finished with a game-high 25 points to lead Salem.

Stephenson won its third boys’ title since 2015 having won back-to-back titles in 2015-16 to go with this year’s championship. It was Salem’s first appearance in the championship in records going back to 2009. 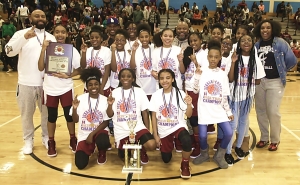 The two teams had finished tied for the Region 2 championship with identical 12-1 records overall and 5-1 in the region after splitting their two regular season meetings. Stephenson won the first meeting 24-16 back on November 11 with Champion bouncing back to win a nail-biter 36-35 on December 15.

Another close game in the championship finale was close from beginning to end as Champion (16-1) held a 3-2 lead after a hard-fought first quarter of play.

Stephenson took a 14-10 lead into the half behind five points from Sabrina Russell (1 three-pointer) and four from Kyndall Sessom. Game MVP Myori Pruitt scored five of the seven Champion points in the second quarter.

Aaliyah Ishmael hit a big three-pointer and Pruitt had four points as Champion rallied to take a 21-19 lead into the fourth quarter. Sessom scored all five of the Stephenson points in the third period.

The game was a fight to the end as both teams managed nine points in the final period and Champion pulled out 30-28 win for the title. Kennedy Daniels hit for seven points in the fourth quarter to keep the Jaguars within striking distance throughout. Pruitt came up with six points including hitting 4-4 from the free-throw line to help seal the win. 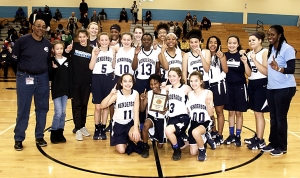 Game Co-MVP Adia Bouldin hit for six points in the fourth quarter to lead the comeback for Henderson. Co-MVP Sierra Burns hit a pair of free throws in the fourth quarter and Trinitee Bell added a basket while the Henderson defense limited Tucker to just one point as the Lady Cougars rallied for the win. Aissatou Bass scored Tucker’s only points of the period as she hit 1-2 from the free-throw line. 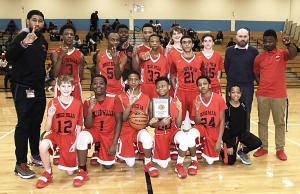 The two teams had split their regular season series one game apiece with Druid Hills (12-5) getting a 33-25 win in the first meeting and Tucker (13-4) bouncing back for a 43-30 win in the last week of the regular season.

Only one point separated the two teams after one quarter of play with Druid Hills holding a slim 8-7 led by Josiah Lawson’s four points. Tucker got four points from Xzaveah Taylor and a three-pointer from Keelin Malone to close the gap.

Jonathan Turner, Brendon Rose and David Sledge scored two points each in the second quarter to take a 14-10 lead into half. Tucker got three-points from Bryce Bowens.

Druid Hills held Tucker to just two points in the third quarter while putting up 12 to pull out to a 26-12 lead with one quarter to play. Lawson had four points, Jaquavious Boswell hit for three and Brendon Rose hit a three-pointer in the run for Druid Hills.
Tucker’s only points of the quarter came on a basket by Bowens.

Tucker turned up the defense in the final quarter limiting Druid Hills to just five points, but came up short with just 13 points. Bowens hit for six points and Christopher Whitmore added four as the rally came up short.

Boswell hit for three-points for Druid Hills and David Sledge had two to help seal the win.

Co-MVPs Jaquavious Boswell and Josiah Lawson scored eight points each in the win to go with seven by Rose and six by Sledge.