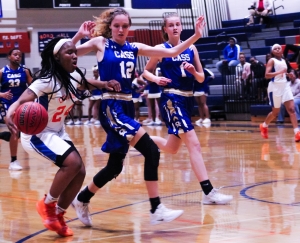 Columbia’s Shontrice Austin (24) had 10 points and 10 rebounds in the Lady Eagles’ 59-43 win over the Cass Lady Colonels. (Photo by Mark Brock)

The Columbia Lady Eagles put on a second half clinic on the way to a come-from-behind 59-43 win over the Cass Colonels to be the first of four DeKalb teams to advance into the Elite 8 of the GHSA high school basketball state playoffs on Wednesday.

Cass’ Alexis Ware had eight points and 10 rebounds in the first half including an offensive put back that put Cass up by 11 (25-14) with 2:27 to play in the second quarter.

Columbia tightened up the rest of way as Shontrice Austin scored five points on a layup and an old fashioned three-point play. Both baskets were aided by nice passes from Constance Thomas as Columbia took the momentum into halftime trailing 25-19.

The Lady Eagles would out-rebound Cass 17-9 in the second half and score 23 points in the third quarter to take control of the game.

Thomas opened the second half with a steal and pass to India Terrell for a layup to start a 7-0 run that put the Lady Eagles up 26-25 with 5:49 to play in the third quarter. Terrell had the first six points of the second half and Thomas was 1-2 at the free-throw line in the run.

Ware tied the game at 26-26 at the 5:24 mark before Thomas answered on the other end with a drive and layup to give Columbia the lead for good at 28-26. The Lady Eagles would put up 23 points in the quarter as Cass committed six turnovers and only pulled down five rebounds.

Terrell took a no-look pass from Thomas on the next fast-break opportunity and the lead was 30-26.

Cass pulled within 30-29 on a three-pointer by Payton Stoddard with 3:50 remaining in the third, but Columbia put together a 12-2 run started by Thomas’s two free throws just seconds after Stoddard’s three. Thomas would go on to score two more baskets to go with a steal by Terrell for a score and a three-pointer from the left corner by Daija Carr to make it a 42-31 lead with 59 seconds left in the quarter.

Cass’s Claire Davis got an offensive board, layup and an and-one to make it 42-34 heading into the fourth quarter.

Columbia opened the fourth quarter with a quick four points on another Terrell layup and following a steal Aleyah Maddox got an offensive rebound and put back to make it 46-34.

A delay game caused Cass to start fouling and Columbia closed out the game on a 9-4 run, including a three-point play by Thomas, to cruise into the Elite 8 for the first time since the 2014 season. It also marked the second consecutive season the Lady Eagles knocked Cass out of the state playoffs.

Constance Thomas led all scorers with 22 points on the night followed by teammate India Terrell with 20. Shontrice Austin picked up her eighth double-double of the season with 10 points and 10 rebounds to add to the Columbia total.

Payton Stoddard and Claire Davis had 11 points each to lead Cass and Alexis Ware finished with 9 points and 12 rebounds (only 2 in second half).

In other Class 5A girls’ games, No. 5 ranked Southwest DeKalb (23-7) pulled away from a close 22-16 halftime lead to get past Rome (19-10) 53-39. Lanee Edwards hit for a game-high 20 points to lead the Lady Panthers while Raven Thurman and Jayla Kimbrough both hit for 9 points with Thurman getting a team high 7 rebounds. Southwest will host Griffin (21-7) which defeated Jones County 69-48.

Class 6A Girls
The Stephenson Lady Jaguars (18-12) had their season come to an end with a 50-35 road loss to Glynn Academy. 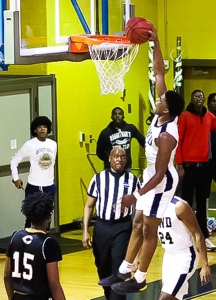 Southwest DeKalb’s KD Johnson (0) with a dunk as part of his game-high 20 points to lead the Panthers to a 63-51 win over Carrollton. (Photo by Lester Wright)

Class 5A Boys
The No. 3 ranked Southwest DeKalb Panthers held Carrollton to just seven third quarter points to begin to pull away to a 63-51 Class 5A boys Sweet 16 victory at Southwest DeKalb on Wednesday night.

The Panthers (23-6) held just a 36-32 advantage at the half before extending the lead to 49-39 heading into the fourth quarter. Southwest kept the Trojans at bay the rest of the way as they lead 56-41 with just over three minutes to play.

The Panthers will host the Woodland-Stockbridge Wolfpack (25-5) which knocked off Jonesboro 53-47 to advance to the Elite 8.

Class 3A Boys
The No. 5 ranked Cedar Grove Saints rolled past the Calhoun Yellowjackets 68-51 at Cedar Grove to advance to next week’s Elite 8 of the Class 3A boys’ state tournament.

Jamarcus Glover had a 16-point, 10 rebound double-double and 3 blocks to lead the Saints in the win. Jakeem Faulkner contributed 13 points and 7 rebounds along with Kanaris Cummings 11 points, 7 rebounds and 4 steals. Devon Barnes dished out six assists to go with 9 points and 2 steals on the night.