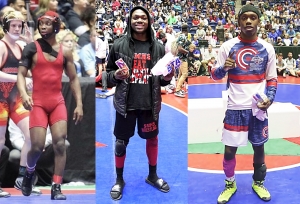 Stone Mountain doubled up on gold medals as seniors Dennis (Deejay) McNeal (120) and Antonio Mills Jr. (138) both finished the season undefeated in bringing home the gold in Class 3A.

McNeal made it back-to-back seasons with gold medals to become the first DeKalb wrestler to win in consecutive years since Terrence Gaddy of Clarkston (Class 3A, 171) in 2008 and 2009.

The Stone Mountain senior won the 113 class a year ago for McNair with a 53-1 record and finished 12-0 this season with county, area, sectional and state titles in hand. He received a bye in the opening round got his first action in the quarterfinal round with a technical fall (18-3) 3:29 into the match against Adairsville’s Dudley Austin (44-10).

He followed that first match with a major decision (16-7) over Jefferson’s Jared Blackburn (42-4) in the semifinals to reach the championship match for the second consecutive season.

The title match came down to a tight 4-2 decision over Sonoraville’s Eli Knight (42-4) for the gold medal.

Mills (14-0) placed second at 132 a year ago and moved up to 138 this season to capture a gold medal for the Pirates. The DeKalb County and area 138 champ received a bye in the first round due to his finish of first at the state sectional the previous weekend.

An 8-2 decision came for Mills in the quarterfinal match as he defeated North Murray’s Alex Pulido (26-13) to advance to the state semifinals.

Next up was Franklin’s Matt Pressley (43-10) in a hard-fought, 7-6 decision in favor of Mills. The win put Mills into the title match for the second consecutive season.

The results were different for Mills this season as he got a sudden victory (3-1) against Sonoraville’s Allen Stone (42-4) to claim the gold.

McNair’s John Webb placed sixth a year ago at 126 and this year climbed the ladder to the top of the podium for the Class 2A 126 gold medal to finish with an impressive 28-1 record on the season.

Webb, the 126 county and area champ, received a first round bye in the tournament and opened the quarterfinal round with a pin fall win at the 1:37 mark of his match over Lamar County’s Levi Banks (23-16) to reach the semifinals.

He bulled his way into the title match with a 20-9 major decision over Toombs County’s Martin Santana in the semis to set up a rematch with Elbert County’s Martrez Huff (47-6) who gave Webb his only loss of the season in the Class 2A Sectional B finals a week earlier.

Huff had won an 18-9 major decision against Webb in the sectional, but a determined Webb battled to a 9-8 decision to claim the state gold medal.

The other lone boy’s wrestler to place was Dunwoody’s Charles McCown (34-10). McCown won the county 195 title two weeks earlier, but opened the state tournament with a loss after finishing fourth at the Class 6A Sectional B the previous week.

McCown then won three consecutive matches in the consolation bracket to reach its semifinal round. He knocked off Stephenson’s Micah Godwin in the third match to make up for a sudden victory 4-3 loss in the sectional’s third place match.

A loss to Grovetown’s Michaia Green (30-4) in the semifinals dropped McCown into the fifth place match against Alexander’s Reid Rogers (40-24). McCown bounced back to get the fifth place spot on the podium with a thrilling 2-0 victory over Rogers.

GIRLS STATE
The first ever GHSA Girls’ State Wrestling Championships were held at Macon along with the boys’ championships and DeKalb brought home a pair of silver medals.

Seven girls from DeKalb competed at the inaugural girls’ state meet and two wrestled their way into the state championship matches.
Stone Mountain’s Daisy Gilleylen (13-6) opened her march to the Class 3A 136 finals with a pin fall (3:55) over Pierce County’s Tristen Music (8-11). She followed that up with a quarterfinal win by pin fall as well defeating Armuchee’s Jamison Powell (8-12) in just 2:53 to claim a spot in the semifinals.

Another pin fall in the semifinals came quickly for Gilleylen as she disposed of Mount Zion-Carrollton’s Ameria Williams (17-17) in just 1:40. The championship match did not go as well as Camden County’s Alexa Downs (8-4) won an 11-3 major decision to claim the top spot.

Stephenson’s Kiomy Morris (9-3) grabbed a silver in the Class 6A 146 class after a slow start claiming a tough 6-5 decision over Alexander’s Brooke Ligon. Morris took 5:29 before pinning North Paulding’s Glenda Veiga (11-4) to advance to the Final Four.

Morris handed Jordan’s T’Keya Hill (12-1) her first loss of the season taking just 3:07 to get a pin fall to reach the title match against North Forsyth’s Sophia Eglian (12-8).

Eglian pulled off a pin fall early in the match to relegate Morris to a second place finish in the tournament.